The two even co-featured in the movies 'Jersey Girl' and 'Gigli'. They delayed their 2003 wedding only days before they were set to walk down the aisle. The two formally split in January 2004. 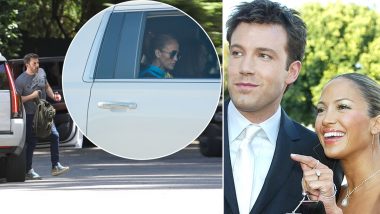 American actor Ben Affleck was spotted visiting Lopez's Los Angeles home on Friday. As per People magazine, a source who knows the 48-year-old Oscar-winning actor and JLo both, told the outlet. "They are friends. They have always been friends and they have seen each other through the years." Affleck and the 51-year-old songstress were engaged in 2002 and made headlines as 'Bennifer' during their years together. The two even co-featured in the movies 'Jersey Girl' and 'Gigli'. They delayed their 2003 wedding only days before they were set to walk down the aisle. The two formally split in January 2004. Ben Affleck and Ana de Armas Split after Almost a Year of Dating: Report.

While the information on their friendship post-split may come as a shock to fans, the two have had only beneficial comments to one another as of late. At a point when Lopez was featured on the front of InStyle's May Beauty Issue, Affleck was among a portion of the stars met for the piece where he applauded the 'Hustlers' actor's professionalism. "I thought I had a good work ethic, but I was completely humbled and blown away by what she was committed to doing day in and day out, the seriousness in which she took her work, the quiet and dedicated way she went about accomplishing her goals, and then how she would go back and redouble her efforts," Affleck told the magazine. Jennifer Lopez and Alex Rodriguez Break Up After 2 Years of Relationship.

He proceeded, "She stays, right up 'til today, the most diligent individual I've run over around here. She has the incredible ability, however, she has additionally buckled down for her success, and I'm so happy for her that she seems, at long last, to be getting the credit she deserves." As reported by People magazine, the exes have also considered their relationship previously, with Affleck discussing the amount of the media consideration about their relationship was unduly negative towards Lopez while on The Hollywood Reporter's Awards Chatter podcast.

"People were so f****** mean about her -- sexist, racist. Ugly, vicious s*** was written about her in ways that if you wrote it now you would literally be fired for saying those things you said," Affleck said during the podcast. "Now it's like, she's lionized and respected for the work she did, where she came from, what she accomplished -- as well she f***** should be!" "I would say you have a better shot, coming from the Bronx, of ending up as like [Justice Sonia] Sotomayor on the Supreme Court than you do of having Jennifer Lopez's career and being who she is at 50 years old today," he added.

In March 2016, Lopez told People magazine that she and the 'Gone Girl' star "didn't try to have a public relationship"."We just happened to be together at the birth of the tabloids and it was like, 'Oh my God.' It was just a lot of pressure." When she first met the actor, "I felt like ... 'Okay, this is it,' " the "Love Don't Cost a Thing" singer continued. "[But] sometimes I feel like what you think people are and how you see them when you love them is different than when they reveal later." With respect to their split in 2004, Lopez reflected, "I think diverse time distinctive thing, who can say for sure what could've occurred, however there was a genuine love there."