IIFA 2022: Shahid Kapoor To Perform at 22nd Edition of the IIFA Weekend and Awards 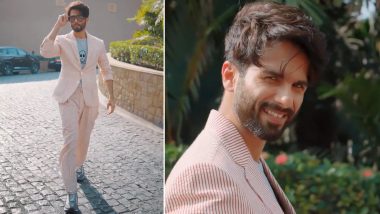 Actor Shahid Kapoor is set to perform at the upcoming 22nd edition of the IIFA Weekend and Awards, the organisers announced on Wednesday. The three-day extravaganza, which was earlier scheduled to be held in May, will kick off on June 2 at Yas Island, Abu Dhabi. IIFA 2022 Postponed Following UAE President Sheikh Khalifa bin Zayed Al Nahyan’s Demise.

The Jersey actor said the annual gala holds a special place in his heart and this year he is excited about making new memories. "I look forward to my performance at IIFA Awards night and what better venue than the spectacular state-of-the-art indoor entertainment venue, Etihad Arena," Kapoor said in a statement. IIFA 2022: Salman Khan to Host the 22nd Edition of the International Indian Film Academy Awards in Abu Dhabi.