A scuffle broke out between two groups in Bihar's Arrah in Bhojpur district, allegedly, over a social media post on suspended BJP leader Nupur Sharma. 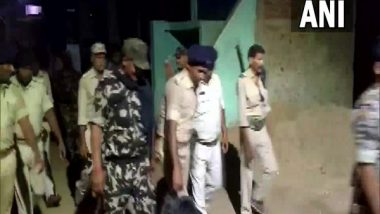 The persons involved in the fight on Tuesday night were detained to prevent the deterioration of law and order in the area.

A person had posted in support of Nupur Sharma on Facebook nearly a week ago. The matter escalated after another person posted a comment on the post leading to the scuffle between the two groups.

Following the incident, the police reached the spot and brought the situation under control.Kaali Poster Controversy: MP Home Minister Narottam Mishra Warns To Ban Film Kaali if Posters Not Removed.

"Some people were taking tea in a shop. They had an argument over a social media post following which there was a scuffle. The people should not believe the rumours. It was a matter of a small fight between two youths. They have been brought in and detained so no law and order situation may occur," said Rajkumar, DM, Arrah.

Meanwhile, days after the horrific killing of a tailor in Udaipur, a lawyer from Ajmer has claimed he has received threats on social media for a specific "Udaipur-like beheading".

The Bar Association, on behalf of the lawyer, submitted a memorandum to the Ajmer Superintendent of Police (SP) and sought action in the matter.

Lawyer Bhanu Pratap Singh Chauhan said that he had come across a video related to Nupur Sharma's statement on social media where the discussion was on Tipu Sultan. After watching the video, he dropped a comment.

"The discussion on social media was very normal and peaceful.

The next day when I opened YouTube, I saw a notification in which a person named Sohail Syed had threatened to behead me," the lawyer said.

Chauhan said that subsequently, he filed a complaint at the Rajasthan government's 'Sampark' portal and also informed the Bar Association about it.

Bhanu Pratap along with the office bearers of the District Bar Association went to meet Ajmer SP Chunaram Jat to submit a memorandum.

The SP was not available so he met the Additional SP Vikas Sangwan and submitted the memorandum. He also urged the police to trace the accused with the help of the Cyber Cell.