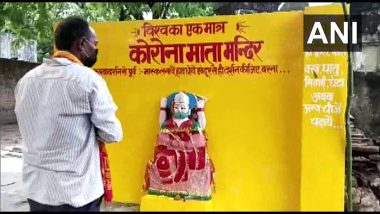 Pratapgarh, Jun 12: People at Juhi Shukulpur village here built a 'corona mata' temple, seeking divine grace to stay clear of the infection. However, the temple built on June 7 was demolished on Friday night.

Villagers alleged that it was demolished by police, which denied the charge, saying it was constructed on a disputed site and one of the parties involved in the dispute razed it. 'Corona Mata' Temple in Uttar Pradesh Gains Popularity, People in Pratapgarh District Flock to Pray for Relief from COVID-19.

Villagers said the temple was constructed five days ago by Lokesh Kumar Srivastava with the help of donations from local residents. He installed the idol of the 'corona mata'. Radhey Shyam Verma of the village was appointed its priest, after which people started offering prayers there. 'Corona Devi' Temple Built by Locals in Coimbatore to Defeat COVID-19 Pandemic.

Sangipur police station SHO Tushardutt Tyagi said the temple was built on a disputed land and was razed by one of the parties involved in the dispute. The matter is being investigated, police said.