The Delhi government may extend the lockdown in containment zones till June 30, an official said, adding that the city administration will permit all activities, including in religious places, allowed by the Centre in a phase-wise relaxation plan. 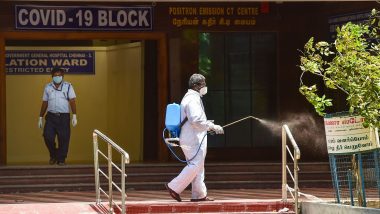 New Delhi, May 31: Opening of salons, shops in malls on an odd-even basis, and religious places are among the activities the Delhi government is likely to allow in the national capital in the coming days, even as the city continued to witness a spike in COVID-19 cases with the highest single-day record of 1,295 fresh infections on Sunday.

The Delhi government may extend the lockdown in containment zones till June 30, an official said, adding that the city administration will permit all activities, including in religious places, allowed by the Centre in a phase-wise relaxation plan. Lockdown 5.0: Maharashtra Issues 'Mission Begin Again' Guidelines, Markets to Open From June 5, Religious Places, Malls, Restaurants to Remain Closed.

A decision on opening of cinema halls and gymnasium may be taken later.

However, measures for maintaining social-distancing like 20 passengers in a bus, two people, excluding the driver, in four wheelers and one person in an autorickshaw will continue to be in place for next more days.

Sources said that neighbourhood religious places are likely to be allowed to open even as famous ones which witness large footfall will remain closed for some more days. The government will come up with detailed guidelines for the next phase of relaxations on Monday.

The government is likely to prohibit people's movement from 9 PM to 5 AM during which all non-essential activities will not be allowed. At present, the timing is from 7 PM to 7 AM.

On Sunday, Delhi recorded its highest single-day spike of 1,295 fresh COVID-19 cases, taking the tally to 19,844, as the death toll due to the disease mounted to 473. The previous single-day highest spike of 1,163 fresh cases was recorded on May 30.

This is the first time in Delhi when more than 1,200 COVID-19 cases have been reported in a day. Meanwhile, the Delhi government has issued show cause notices to four leading facilities in the national capital, including AIIMS and LNJP Hospital, for "delay in reporting death cases".

While LNJP Hospital is a dedicated COVID-19 facility under the Delhi government, the rest three hospitals are under the central government.

"Show cause notices have been issued to AIIMS, LNJP Hospital, RM Hospital and Safdarjung Hospital to explain the reasons for delay in reporting death cases and for violation of the directions issued by the Delhi Health Department, as well as by DDMA under the Disaster Management Act," the department said in a statement.

Besides, memoranda have been issued to Baba Saheb Ambedkar Hospital, Guru Teg Bahadur Hospital and Rajiv Gandhi Super Specialty Hospital also to explain the reasons for "delay in reporting death cases and for violation of the directions" issued by the health and other authorities.

The Delhi government had faced allegations of under-reporting deaths due to the coronavirus, but it blamed the hospitals for the discrepancy in numbers saying they were not filing timely death reports of patients. Lockdown 5.0 in UP: Staggered Office Timings, 12-Hour Markets, Religious Places to Open; What's Allowed and Prohibited.

The health department has announced additional guidelines for disposal of bodies of those who die of COVID-19 or suspected to have died of it at hospitals, directing that such bodies be sent to mortuaries within two hours.

On Sunday, Lt Governor Anil Baijal directed authorities to continue with the strict measures in containment zones in order to arrest the spread of COVID-19 in the national capital.

Baijal held a meeting with Chief Secretary Vijay Dev and other top officers of the Delhi government and municipal corporations to review steps being taken to ramp up the medical infrastructure in the city keeping in mind various scenarios.

Two Delhi Police Assistant Sub-Inspectors have died due to COVID-19 since Saturday evening, taking the overall coronavirus casualty figure in the force to three, officials said on Sunday.

While a 52-year-old ASI died around 11.30 AM Sunday during treatment at the Army Base Hospital here, another officer of the rank passed away at the same facility Saturday evening, they said.

A Delhi Police spokesperson said that nearly 500 personnel have tested positive for the deadly virus so far. Facing drastic decline in tax collection in the wake of the coronavirus-forced lockdown, Deputy Chief Minister Manish Sisodia on Sunday said that the AAP government has sought an immediate assistance of Rs 5,000 crore from the Centre to pay salaries to its employees and meet office expenses in this "hour of disaster".

Addressing an online media briefing, Sisodia said that the lockdown has affected the economy of the country as well as Delhi. After the briefing, Chief Minister Arvind Kejriwal took to Twitter and requested the central government to help the people of Delhi "in this hour of disaster".

Slamming the Delhi government, the Delhi BJP on Sunday asked the AAP dispensation whether it was demanding Rs 5,000 crore from the Centre to meet its promotional expenses. Indian Railways to Run 200 Passenger Train Services from June 1, Over 1.45 Lakh Passengers Will Travel on Day 1 of Lockdown 5.

Delhi BJP president Manoj Tiwari asked Chief Minister Arvind Kejriwal if his government needed the money to spend on advertisements. He also cited central government schemes for poor people in a bid to suggest that Sisodia's demand was misplaced.

Tiwari tweeted, "790 crore directly in Jan Dhan accounts, free cylinders of Rs 836 crore, Rs 243 crore given to Divyang, widows and senior citizens, Rs 768 crore of ration that you could not distribute. Arvind Kejriwal ji are you demanding the money for advertisement expenses?"