Union Minister Anurag Thakur on Saturday said that the upcoming month of May will be dedicated to women in Himachal Pradesh when attention would be given to the women-related issues. 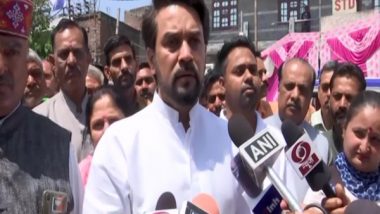 Una, April 16: Union Minister Anurag Thakur on Saturday said that the upcoming month of May will be dedicated to women in Himachal Pradesh when attention would be given to the women-related issues.

Speaking to the reporters here on completion of four years of Mobile Health Service, Thakur said, "Har Ghar Har Dwaar Haspatal, an initiative taken four years ago on April 14, 2018, with 3 vehicles to provide healthcare facilities to people in the villages. Today, after 4 years I can say that more than 7 lakh people have received free checkups and free treatments. This has helped people save crores of rupees. We will dedicate a complete May month to the women. During this one month, attention would be given to the women-related issues, and all sorts of tests would be conducted." ‘Congress Doesn’t Look Outside Gandhi Family’, Says Union Minister Anurag Thakur.

The Union Minister further stated that the mobile healthcare services that had begun with three vehicles in 2018 have now increased to 32 and have reached 6,400 villages across the state. "We have reached nearly 6,400 villages through these 32 vehicles. Our focus is to increase it further," he said.

Earlier, addressing on the occasion, the Minister said that Tuberculosis is a grave problem and the state aimed at removing it by 2021, however, due to the pandemic, there was a shift in the priorities.

"Tuberculosis is a grave problem, world's 1/4 of TB patients are in India. There's stigma around people suffering from it. PM Modi kept the goal to eradicate TB by 2025. In Himachal, we aimed to remove it by 2021 but covid shifted our priorities," he said.