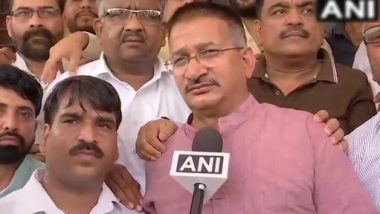 Upadhyay arrived at the BJP office in Dehradun today morning. Speaking to ANI before joining the party, he said, "Kishore will do something new now. Time has come to speak up."

Addressing the media persons after joining BJP, Upadhyay said, "I think Uttarakhand's development is only possible under the leadership of PM Narendra Modi and I want to work towards making Uttarakhand a better state."

"I am impressed with the work RSS and BJP have done in Tehri and Uttarkashi. I am grateful to Prahlad Joshi for giving me this opportunity to be a part of the BJP," he added.

Speaking on the reason behind his expulsion from Congress, the newly inducted BJP leader said, "A picture of myself with BJP went viral which was represented in a different light."

Earlier on Wednesday, Congress expelled former party chief in Uttarakhand Kishore Upadhyay for "anti-party activities". He was removed from the primary membership of the Congress party for six years.

The All India Congress Committee (AICC) in a letter on January 26 had written: "Since you had been indulging in anti-party activities despite several warnings, so you are hereby expelled from the primary membership of Congress party for six years with immediate effect."

Meanwhile, elections to the 70-member Uttarakhand assembly will be held on February 14. The counting of votes will take place on March 10.