BJP leader GVL Narasimha Rao on Saturday took a jibe at Maharashtra Chief Minister Uddhav Thackeray and said that instead of visiting Ayodhya, he should book a "Hajj Yatra" along with Congress leader Rahul Gandhi. 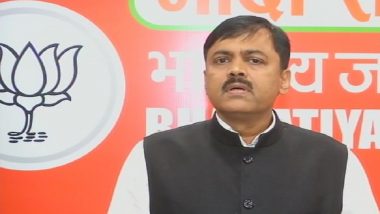 New Delhi, January 26: BJP leader GVL Narasimha Rao on Saturday took a jibe at Maharashtra Chief Minister Uddhav Thackeray and said that instead of visiting Ayodhya, he should book a "Hajj Yatra" along with Congress leader Rahul Gandhi. "Rather than going to Ayodhya, Uddhav Thackrey should book a Hajj Yatra and go there along with Rahul Gandhi, which will suit his (Thackeray's) ongoing politics," said Rao.

His statement came soon after Bharatiya Janata Party (BJP) on Saturday asked the Maharashtra CM to take Rahul Gandhi with him to Ayodhya and Senior Shiv Sena leader Sanjay Raut counter-questioning if the BJP leaders would take former Jammu and Kashmir Chief Minister Mehbooba Mufti with them on their visit to Ayodhya?"Uddhav Thackeray is in the company of Congress and NCP. He is the Chief Minister of Maharashtra at the mercy of Congress party and Rahul Gandhi, who are openly following appeasement politics," said Rao."

By visiting Ayodhya, Thackeray is only committing a sin and is not doing any favour to anybody. We would rather want him to go with Rahul Gandhi to a place of the latter's choice because today Uddhav Thackeray does not represent the Hindutva politics which his father did. His party used to pursue it until a few weeks ago," he added. On Saturday, Sanjay Raut had confirmed that Uddhav Thackeray will be visiting Ayodhya on March 7 this year.

He also said that Ministers of alliance partners (Congress, NCP) can also accompany the Chief Minister. The Maha Vikas Aghadi government was formed in November last year after the BJP failed to prove his majority in the State Assembly.