Xiaomi Unveils Its Most Expensive Smartphone ‘Mi 11 Ultra’ in India at Rs 69,999 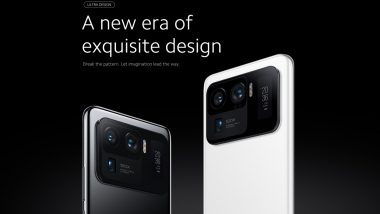 New Delhi, April 23: Smartphone maker Xiaomi on Friday unveiled its most expensive handset, Mi 11 Ultra, at a price of Rs 69,999 in India to compete in the premium segment. Before this, the company had launched Mi 10 5G for Rs 49,999 and Rs 54,999 in January which clocked sales of Rs 400 crore within three weeks of the launch.

"With the launch of Mi 11 Series, we have introduced technology that is not only future proof but also elevates the overall user experience, like no other. Pushing the boundaries of innovation, we have taken a giant leap forward in departments such as camera, sound, performance and display," Xiaomi India marketing lead for Mi Sumit Sonal said on the sidelines of launch. Xiaomi Mi 11 Ultra, Mi 11X, Mi 11X Pro & Mi QLED TV 75 Launched in India; Check Prices, Features & Specifications.

Mi 11 Ultra is the first phone in the world to come with a pro-grade triple camera setup on the rear side which includes 48 megapixel (mp) ultra wide camera, 50 mp Truepixel GN2 camera and 48 mp periscope telephoto camera. The phone has a 5G chipset from Qualcomm, Snapdragon 888 which claims to deliver 35 per cent faster processing speed than the previous version.

At the beginning of 2020, Xiaomi had announced that Mi and Redmi are going to operate as separate brands, with separate product, business and marketing teams.

"With Mi, we were focused on establishing it as a premium brand in the market, with an aim to bring the latest and the best technology to our Mi Fans. We will continue to launch premium products under the Mi portfolio to establish the difference between Redmi and Mi.

"Depending on the requirements, we will continue bringing products that are best suited for India, from global markets. We are hopeful that with good products and marketing, we will be able to change the prevailing perception," Sonal said.

Xiaomi India managing director Manu Jain said that the smartphone can withstand water for 30 minutes at a depth of up to 1.5 meter. The company will announce availability of Mi 11 Ultra shortly. Xiaomi leads India's smartphone market with 26 per cent market share in 2020.

The Mi 11X series comes integrated with ISRO's indigenously developed navigation system NavIC which will allow its user to have better navigation accuracy across India and 1500 kilometre around the Indian subcontinent. The company also announced the launch of its new Mi QLED TV 75 for about Rs 1.2 lakh which will be available from April 27.