Schwarzenegger himself has never been nominated for an Oscar, but won a Golden Globe in 1977 and was nominated for a second in 1995. Furthermore, he won an Emmy in 2014 for executive producing the documentary Tied with American Masters. 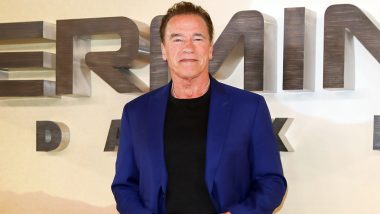 Arnold Schwarzenegger in his new interview on Jimmy Kimmel's show spoke about Hollywood's biggest event the Oscars and termed it as 'boring'. It also drew sharp criticism from fans and critics alike in the wake of switching up the format, venue and more on Sunday. According to Fox News, the 73-year-old actor showed up on 'Jimmy Kimmel Live!' on Monday night and conceded to just watching about 33% of the service "because it was so boring." Oscars 2021: From Nomadland to Sound of Metal, Ranking 93rd Academy Awards Best Picture Nominees As Per IMDB Rating (LatestLY Exclusive).

"I basically just turned it off and I just couldn't watch it anymore because there was so much talent there on the stage that it was so boring - how could you make this, with all this talent, so boring?" the actor continued. "I think next time, they should take it to Muscle Beach and have the Oscars on Muscle Beach," he joked. Schwarzenegger himself has never been nominated for an Oscar, but won a Golden Globe in 1977 and was nominated for a second in 1995. Furthermore, he won an Emmy in 2014 for executive producing the documentary Tied with American Masters. Oscars 2021: Nomadland's Chloe Zhao Creates History by Becoming Second Woman in the Academy Awards to Win Best Director Honour.

As reported by Fox News, Muscle Beach, the star's suggested locale, is located in Santa Monica, California and is known for popularising bodybuilding, physical fitness, acrobatics, gymnastics and more. The Oscars made several changes to the telecast this year, due both in part to Covid and constantly dropping ratings - however, this year also saw an enormous drop in viewership. Musical performances were removed from the current year's ceremony and were rather given during a pre-show that that aired before the awards were given out.

The show likewise was criticized for permitting longer acceptance speeches and awkward interludes by presenters. Hollywood heavyweights like Laura Dern, Halle Berry, Harrison Portage and more presented awards after lengthy monologues many found to be unnecessary. Finally, the most intense criticism for the show came from the changing of the awards' traditional order, presenting best picture before the leading acting awards. The change, many thought, was done to close the show with an emotional win for the late Chadwick Boseman - who was considered a lock for the award - but ultimately, Anthony Hopkins won, leaving many feeling that the ending was awkward.