India skipper Virat Kohli had recently spoken about the need to remove the soft signals when referring to a decision to the third-umpire and this point has been discussed by the Board of Control for Cricket in India (BCCI) as they have done away with soft signals for the upcoming Indian Premier League (IPL). 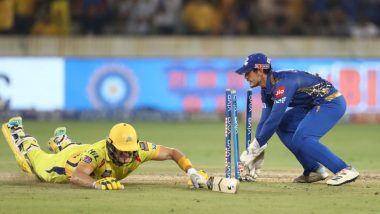 New Delhi [India], March 27: India skipper Virat Kohli had recently spoken about the need to remove the soft signals when referring to a decision to the third-umpire and this point has been discussed by the Board of Control for Cricket in India (BCCI) as they have done away with soft signals for the upcoming Indian Premier League (IPL). In its updated playing conditions for this year's IPL, accessed by ANI, the BCCI has clearly stated that the on-field officials would not be allowed to give soft signals when referring a decision to the third umpire. What is Soft Signal by Umpire? Cricket Fraternity Debate Suryakumar Yadav, Washington Sundar’s Dismissal in IND vs ENG 4th T20I Match.

When one looks at Appendix D -Clause 2.2.2 of the playing conditions before IPL 2020 and now before IPL 2021, there is one clear change and it pertains to the usage of the soft signal.

"Soft Signal: Onfield Umpire giving Soft Signal while referring the decision to the 3rd Umpire will not be applicable," states the updated playing conditions for IPL 2021. The decision to remove the soft signal has been taken so that the third umpire can make the best possible decision without keeping the on-field call in mind. Speaking to ANI, sources in the know of developments said that the call has been made to avoid any confusion in making umpiring decisions. IPL 2021 Schedule in PDF for Free Download: Get Indian Premier League 14 Venues, Full Time Table, Fixtures and Match Timings.

"There have been cases wherein the soft signal has kind of created confusion rather than giving clarity to the third umpire and that is why it was felt that going back to the old method of referring decisions to the third umpire if the on-field umpires are not sure should be followed," the source said.

Speaking on the soft signal issue, Kohli had said: "If it hits the stumps or missing the stumps, it should not matter how much the ball is clipping because it is creating a lot of confusion. One more factor that needs to be considered is how the fielding team responds to a dismissal that is claimed. This is somewhere defining the soft signals as well. You have to question what the spirit of the game is and what those guidelines are because if things like that happen with the Indian cricket team overseas then you are talking about a completely different conversation about the spirit of the game.

"So look, it is a serious thing which needs to be considered because there is a lot at stake in bigger tournaments. You do not want any grey area hampering the game and it leaves with you no clarity." There is also a major change in the updated guidelines as if there is a case of short run, then the third umpire can check whether it was a short run or not and the official can overturn the decision made by the on-field umpires.

Short-run: "In the case of the short run, the third umpire checks the short run and can overturn the decision made by the on-field umpires," states the updated playing conditions for IPL 2021. This short-run point became a huge debating point last year in the match between Kings XI Punjab (now Punjab Kings) and Delhi Capitals. The Punjab management also made an official complaint after they ended up on the losing side.

As a measure to control the match timings, the 20th over in each innings is now included in 90 minutes, earlier the 20th over was to start on or before the 90th minute. In updated guidelines, now the third umpire can overrule the no-ball decision made by the on-field umpire. There is another updated clause in the playing conditions and it states that in an uninterrupted match, subsequent super overs can be played till an hour's time from the actual finished time of the tied matches (Clause 16.3.1).