The defending Premier League champions Manchester City have broken the British transfer record by completing the signing of Jack Grealish for £100m ($139m) from Aston Villa on Thursday. 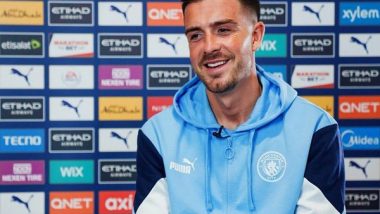 Manchester, August 6: The defending Premier League champions Manchester City have broken the British transfer record by completing the signing of Jack Grealish for £100m ($139m) from Aston Villa on Thursday.

The 25-year-old midfielder joins from Aston Villa, having made 213 appearances over the course of eight seasons, scoring 32 goals and assisting 43. The England international has signed a six-year contract keeping him at the Etihad Stadium until the summer of 2027.

Grealish will don jersey No. 10 at City. He inherits the shirt from Sergio Aguero, who wore 10 with a distinction between 2015-21. Lionel Messi Quits Barcelona Due to Financial & Structural Obstacles, Fans Heartbroken With the Sudden Development.

In addition to widespread admiration for his domestic performances, Jack also received plaudits for his impressive individual and team contribution to the England squad, as the national team reached the final of the Euro 2020 competition in a truly memorable summer for fans all over the UK.

"I am incredibly happy to have joined Manchester City, "Grealish said in a release by Manchester City. "City are the best team in the country with a manager considered to be the best in the world - it's a dream come true to be part of this club. Over the past 10 seasons, they have won major trophies consistently. Pep coming here has taken them to the next level and the football this team plays is the most exciting in Europe. To play for Pep and learn from him is going to be special and it's something any top footballer would want."

"The facilities are amazing, and I honestly can't wait to get started, meet everyone and get playing."

In the 2020-21 campaign, Jack won Villa's Player of the Season award, before making five appearances for England en route to the final of the Euros, delivering a game-changing cameo in the famous 2-0 last-16 win over Germany at Wembley.