Why Women Kill Season 2 Will Have Nick Frost, Allison Tolman in the CBS Show

The dark comedy series has been created by Marc Cherry of "Desperate Housewives" fame. According to Deadline, the new season is set in 1949 and will feature new storylines. 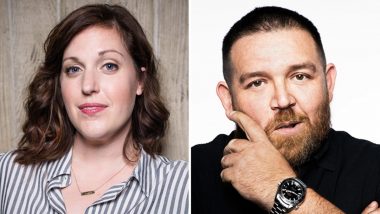 Actors Nick Frost and Allison Tolman are set to star in the second season CBS All Access' anthology series "Why Women Kill". The dark comedy series has been created by Marc Cherry of "Desperate Housewives" fame. According to Deadline, the new season is set in 1949 and will feature new storylines. It will explore what it means to be beautiful, the hidden truth behind the facades people present to the world, the effects of being ignored and overlooked by society, and finally, the lengths one woman will go in order to finally belong. Stay Close: Cush Jumbo, James Nesbitt, Richard Armitage to Star in Netflix’s Series Adaptation of a Bestselling Novel

Tolman, best known for featuring in the FX series "Fargo", will play Alma, a timid and awkward housewife, who remains optimistic in the face of the world's cruelty. Alma yearns for a spot in the local garden club and to see her ungainly daughter married, but her life is disrupted once she learns of her husband's secret hobby. Frost, who starred in filmmaker Edgar Wright's "Three Flavours Cornetto" trilogy alongside Simon Pegg, will portray Bertram, Alma's beloved husband. Things I Know To Be True: Nicole Kidman to Star in Upcoming Amazon Prime Series

He spends his days as a veterinarian putting sick and injured animals out of their misery. Always kind and good-humoured, Bertram has a secret hobby that is darker than his jovial nature lets on. "Why Women Kill" is produced by Imagine Television Studios and CBS Studios. Cherry serves as executive producer alongside Brian Grazer, Samie Kim Falvey, Michael Hanel, Mindy Schultheis, Marc Webb and Francie Calfo.