Joe Biden Administration Will Engage the World 'as It Is', Not 'as It Was', Says US Secretary of State-Designate Antony Blinken

Blinken in his prepared testimony to the Senate Committee on Foreign Relations ahead of his confirmation hearing also did not rule out a military intervention overseas if the lives of Americans were at stake. 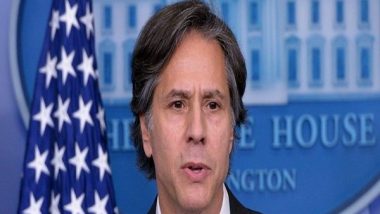 Washington, January 19: Underlining America's "growing rivalry" with China and Russia, US Secretary of State-designate Antony Blinken on Tuesday said the Biden administration will engage the world "as it is" and not "as it was", indicating that the diplomacy of the next president would be driven by ground realities.

Blinken in his prepared testimony to the Senate Committee on Foreign Relations ahead of his confirmation hearing also did not rule out a military intervention overseas if the lives of Americans were at stake.

"Working across government and with partners around the world, we will revitalise American diplomacy to take on the most pressing challenges of our time. We'll show up again, day-in, day-out whenever and wherever the safety and well-being of Americans is at stake,” he said. Inauguration Day 2021 Date and Time: Here’s Where and How To Watch Joe Biden’s Swearing-In Ceremony; Guest List, Schedule and All You Need To Know About January 20 Event.

“We'll engage the world not as it was, but as it is. A world of rising nationalism, receding democracy, growing rivalry with China, Russia, and other authoritarian states, mounting threats to a stable and open international system, and a technological revolution that is reshaping every aspect of our lives, especially in cyberspace," said Blinken, who if confirmed by the Senate, will succeed Mike Pompeo as the next Secretary of State.

Blinken, 58, is expected to be confirmed by the Senate soon after Biden is sworn in as the president on January 20. On Tuesday, a day before the inauguration, Senate committees are also holding confirmation hearings of Treasury Secretary Janet Yellen, Defence Secretary Lloyd J Austin, Homeland Security Secretary Alenjandro N Mayorkas and Director of National Intelligence Avril Haines. In his prepared testimony, Blinken said, "For all that has changed, some things remain constant. American leadership still matters."

"The reality is that the world doesn't organise itself. When we're not engaged, when we don't lead, then one of two things happen: either some other country tries to take our place, but probably not in a way that advances our interests or values. Or no one does, and then you get chaos. Either way, that does not serve the American people," he said.

Blinken, who served as the deputy secretary of state from 2015 to 2017 under President Barack Obama, said humility and confidence should be the flip sides of America's leadership coin.

"Humility because most of the world's problems are not about us, even as they affect us. Not one of the big challenges we face can be met by one country acting alone -- even one as powerful as the US.

"But we'll also act with confidence that America at its best still has a greater ability than any country on earth to mobilize others for the greater good. Guided by those principles, we can overcome the COVID crisis -- the greatest shared challenge since World War II," he told members of the Senate Foreign Affairs Committee. We The People Concert: Inauguration Day 2021 Celebrations Begin with Online Concert; Fall Out Boy, Will.I.Am & Others Perform at the Event.

Blinken said the US has a great deal of work "to do at home" to enhance the country's standing abroad. "We can outcompete China -- and remind the world that a government of the people, by the people, can deliver for its people. We can take on the existential threat posed by climate change. We can revitalise our core alliances -- force multipliers of our influence around the world.

"Together, we are far better positioned to counter threats posed by Russia, Iran and North Korea and to stand up for democracy and human rights. And in everything we do around the world, we can and we must ensure that our foreign policy delivers for American working families here at home," he said.