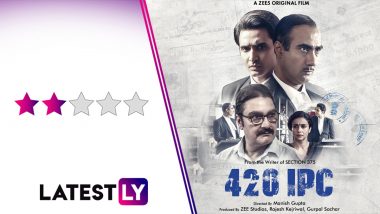 420 IPC Movie Review: Manish Gupta's 420 IPC is a legal thriller, a fave genre for yours truly just for the rush the courtroom sequences. From 12 Angry Men to Jolly LLB to the recent Jai Bhim, who doesn't like a courtroom drama done right? I hadn't seen the trailer or any promotional material for the film with the idea of 420 IPC to surprise. There are movies that are shorn of any presumptions and dazzle, and they turn out to be surprisingly good. Unfortunately, despite the presence of good actors like Vinay Pathak, Ranvir Shorey, Gul Panag and Arif Zakaria and an suspenseful premise, 420 IPC doesn't work wonders. 420 IPC Director Manish Gupta Says He Like to Base His Film Characters on Real People.

Bansi Keswani (Vinay Pathak) is a mild-mannered CA with a wife (Gul Panag) and a teenage son, and is going through a financial crisis that could make him lose his house in mortgage. One day, he is brought in for questioning by CBI for an MMRDA scam, though he is let off when they couldn't find anything incriminating on him. Bansi, however, is trapped in a case where he is accused of stealing three cheques from a builder, Neeraj Sinha (Arif Zakaria). Continually professing innocence, Bansi hires a young lawyer Balbir (Rohan Vinod Mehra) to fight his case, while veteran Jamshedji (Ranvir Shorey) handles the prosecution.

The best part about 420 IPC is that it had all the makings of a smart legal thriller, and the worst part about it is that the makings doesn't produce a smart legal thriller. The setup and the drama generated out of the courtroom proceedings are intriguing enough, if you can just about ignore Rohan Vinod Mehra's two-note performance and Ranvir Shorey surprisingly phone-ing a Parsi act. There are some interesting character turns that will make you realise that not everyone is what they seem to portray initially. 420 IPC also doesn't divest itself into needless subplots within its 138-minute runtime. OTT Releases of The Week: R Madhavan's Decoupled & Henry Cavill's The Witcher Season 2 on Netflix, Ranvir Shorey's 420 IPC on ZEE5 and More.

The third act, however, is a major disappointment. 420 IPC throws one twist after another, changing the very perception of the events that preceded them. The writing and the execution go for a toss here. It is quite annoying when a film tries to hide key events from a scene that is played earlier and then replay it in the climax for shock effect. I like it when a movie tricks me with its narrative, but I totally hate it when it does so with convenient editing. 420 IPC deceives the viewer in the clumsiest way possible, that is more likely to elicit annoyance on how the final twists are pulled by questioning the intelligence of the watcher.

- A Couple of Performances Don't Work

420 IPC is a very average courtroom drama that starts off okay, gets better in the middle portions but turns annoying in the final act when it tries to pull the rug off your feet. 420 IPC is streaming on Zee5.

(The above story first appeared on LatestLY on Dec 17, 2021 01:22 PM IST. For more news and updates on politics, world, sports, entertainment and lifestyle, log on to our website latestly.com).