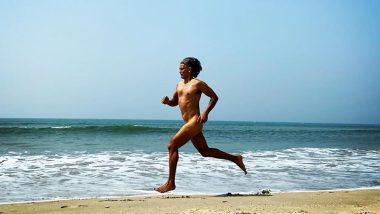 Panaji, Nov 6 (IANS) The South Goa district police on Friday booked model-actor Milind Soman for obscenity, days after a nude photograph of the former supermodel taken while running on a Goa beach went viral. A Goa Police spokesperson said that an FIR under Section 294 (obscenity) of the Indian Penal Code, along with other relevant sections of the Information Technology Act, has been registered against Soman. "The FIR has been registered at the Colva police station in South Goa district," the spokesperson said. Milind Soman Runs Nude On The Beachside On His 55th Birthday! (View Pic).

On November 4, which was Soman's 55th birthday, the actor had uploaded a photo on social media showing him running nude on a Goa beach on his 55th birthday with the caption, "Happy birthday to me Y...55 and running ! Y". @5Earthy." Milind Soman’s ‘Nude’ Running Pic in Goa Gets Praised for Fitness, Poonam Pandey Gets Booked for ‘Obscene’ Shoot; Twitterati Smells Sexism! (View Tweets).

Milind's post which was otherwise appreciated, came under fire from netizens when actress Poonam Pandey was booked and arrested for shooting an obscene video on restricted property in Goa. Many called Milind's supporters and Poonam's haters hypocrites. Twitterati called put the sexism of the society that hailed Milind for running with no inhibitions and at the same time, shamed Poonam for her (some pics were in a bikini) photoshoot.

(The above story first appeared on LatestLY on Nov 06, 2020 11:45 PM IST. For more news and updates on politics, world, sports, entertainment and lifestyle, log on to our website latestly.com).