Ateet is a Zee5 Original Film, directed by Tanuj Bhramar and starring Rajeev Khandelwal, Priyamani Raj and Sanjay Suri. It is about a military officer who mysteriously returns from the dead after years to his ex-wife and her new husband's lives. 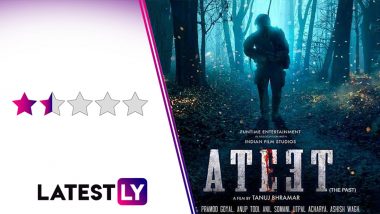 Ateet Movie Review: Imagine if Raj Kapoor from Sangam returns years after being thought killed in action during war only to find Rajendra Kumar and Vyjayanthimala's characters happily married? And imagine that there is something very sinister about his return. That idea, in short, is what I can say about the premise of Zee5's new original film, Ateet, starring Rajeev Khandelwal, Priyamani and Sanjay Suri, and directed by Tanuj Bhramar. Naxal: Rajeev Khandelwal to Play a Cop in the Upcoming ZEE5 Series.

Ateet means 'past' in Hindi and Ateet is also the name of Rajeev Khandelwal's character, who returns from a forgotten past to his wife Janhvi (Priyamani) and daughter Suhana's lives. Ateet was presumed to be killed years ago during a military operation, and Janhvi has since then moved on and remarried Colonel Vishwa (Sanjay Suri), a fellow commander in Ateet's unit. Both Janhvi and Vishwa have kept Suhana in dark about her real father, so Ateet's shocking and mysterious return bring chaos in their lives.

But there is more to it. Ateet isn't willing to talk about where he had been all these years. He then accuses Vishwa of letting his unit die and trying to kill him, while Vishwa claims Ateet is lying because he wants his family back. Moreover, there is something sinister happening in the cantonment since Ateet's return, what with the mysterious death of an army nurse to Vishwa seeing spooky things.

So how is Ateet still alive? Who is telling the truth? And why are the ghostly makeups looking as if the makers have borrowed Snapchat filters?

The film begins on a very intriguing note what with the return of Ateet and how Vishwa and Janhvi's lives turn topsy-turvy after this. Vishwa's spooky encounters (are they medicinal hallucinations?) and Ateet's strange behaviour keep you guessing, not to mention, the mystery about what really happened in that military operation. It looks like we are in for thrilling, suspense-filled ride, even if there are things that keep bothering the cynic in me. Like why is Janhvi's reaction to her dead -ex-husband's return so underwhelming? It's as if she is habituated with exes turning up at inopportune moments, and at times, acts like a girl tired of two men vying for her attention? Sorry, but the last time I checked, this is no Student of the Year. Walking Dead of the year, maybe!

Anyway, once we ignore the glitches and strap ourselves for a ride to the unknown, it gets derailed immediately after a major character makes an early exit. From thereon, Ateet takes a nosedive as it sheds itself of anything that makes it even remotely interesting. The spooky going-ons don't even generate a single good scare and the resolution of the mystery feels totally anti-climactic. And even after the movie is over, we are still clueless as to why Ateet took so long to make his macabre return, or whatever the heck he is! It is as if the writing team run out of ways to make the movie retain sort of sense, before ditching their attempts and go the Hindi television horror route.

The editing jerks and befuddled character behaviours make the movie even more annoying in the second half, leading to a climax that is pretty laughable, made more so by some poor VFX. Bamfaad Movie Review: Aditya Rawal Makes an Intense Debut, Shalini Pandey and Vijay Varma Are Superb in Zee5’s Gripping Love Triangle.

Even the actors look quite disinterested, with only Priyamani giving some semblance of a performance in the film.  Rajeev is quite mechanical in the role, while Suri is still stuck in his 'My Birthday Song' mode. There are a couple of songs that should have been cut from the film, at least get its runtime reduced, even if the shortened length cannot do away with the sheer absurdity of how the film turns out to be.

Watch The Trailer of Ateet here:

Look, I understand that web movies like Ateet is restricted by its making and budget constraints for the medium it is being streamed for. But a glossy look isn't necessary for a good watch. See Zee5's own Barot House and Bamfaad as examples. Both may lack the polish of a Dharma film, but they are, nevertheless, helped by the consistency in their writing and performances. Both of which are sorely lacking in Ateet.

- The Intriguing First Half

Ateet does a shoddy work of a very intriguing premise, that could have built up to a good, supernatural thriller. Instead, what we get is a below-par movie that lacks both in scares and thrills. Ateet is streaming right now on Zee5.

(The above story first appeared on LatestLY on Apr 21, 2020 05:31 PM IST. For more news and updates on politics, world, sports, entertainment and lifestyle, log on to our website latestly.com).