Shah Rukh Khan writes a few words as a token of encouragement for Tahira Kashyap on her new book and revealed something about the author filmmaker's dating days with Ayushmann Khurrana. The revelation had left SRK between happy and embarrassed. 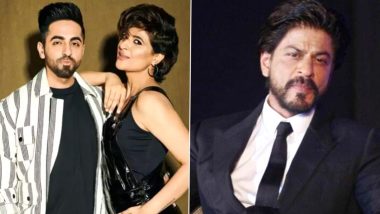 Shah Rukh Khan has a huge fanbase not just in the country in general but in Bollywood as well. Apart from a host of women, Ayushmann Khurrana and Rajkummar Rao are the biggest fanboys. Even the late Sushant Singh Rajput was an SRK lover and the superstar's tweet about him after his demise speaks about how much he felt the Kai Po Che actor's love. Khurrana's wife Tahira Kashyap too is an ardent admirer of the actor who has now written a few words in the author- filmmaker's book The 12 Commandments Of Being A Woman. She shared the picture of his quote and there's something that caught our attention. IPL 2020: Shah Rukh Khan Shouts His Iconic Film Dialogue ‘Rahul Naam Toh Suna Hoga’ at KKR vs CSK Man of the Match Rahul Tripathi (Watch Video)

Shah Rukh Khan writes how he isn't sure whether to be happy or embarrassed when we got to know that his movies at the theatres were Tahira and Ayushmann's favourite makeout spots. He also recollected that he now knows why these two would have silly smiles on their faces every time they met him. It's quite a cute anecdote to share.

Dear @iamsrk Big thanku for so many things❤️ For your movies that helped me shift a couple of bases...ahem! For letting me experience ur magnanimity at the TED talk when u didn’t judge me for my aspiration to be in Pam/Kim clan & for having shared your kind words for my book!🙏 pic.twitter.com/LcOMszQW0k

Ayushmann has often spoken about his wife-eyed appreciation for SRK. The reason why many feel drawn towards this superstar is that he is a self-made man. He has taught an entire generation how to love although he rose to fame for his anti-hero roles. Shah Rukh Khan is one of the biggest success stories of an outsider ruling the Hindi film industry after perhaps Amitabh Bachchan.

(The above story first appeared on LatestLY on Oct 12, 2020 04:02 PM IST. For more news and updates on politics, world, sports, entertainment and lifestyle, log on to our website latestly.com).