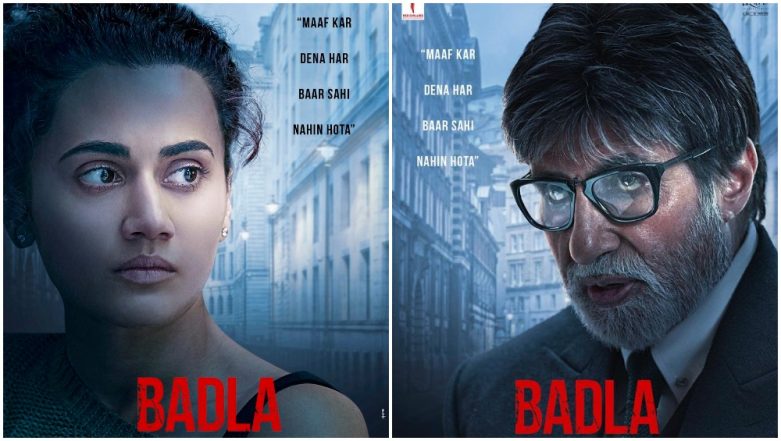 Amitabh Bachchan and Taapsee Pannu star in this week's thriller, Badla. The movie is directed by Sujoy Ghosh, known for making one of the best thrillers in Bollywood, Kahaani. The trailers of Badla has caught everyone's fancy, and coming together of Big B and Taapsee after 2016 film PINK, makes it all the more special. This is also the second time Sujoy is working with Amitabh Bachchan after the fantasy film, Aladdin. There are high expectations from the film to better Kahaani and establish Ghosh as the auteur of thrillers. Let's see how the first half of Badla has managed to work towards that impression. Badla: 5 Spanish Thrillers That We Want to See Being Remade in Bollywood After Amitabh Bachchan and Taapsee Pannu’s Film.

For those who don't know this, Badla is an official adaptation of the 2017 Spanish film, The Invisible Guest. From what we have seen, Badla is almost a frame to frame adaptation of The Invisible Guest, save for the gender reversal. Naina is accused of killing her lover, Arjun. She claims that she was attacked by an unknown assailant while they were in a hotel room, who later killed Arjun. However, the police couldn't find any proof that any outsider entered or left the room. Naina is given three hours by her new lawyer Badal Gupta to tell him everything about the incident. And in the process, more skeletons tumble out of the closet.

The first half works as the plot unravels and the mystery thickens. The interplay between Amitabh and Taapsee provides a lot of interesting moments. Supporting players like Amrita Singh and Tony Luke also form very crucial to the plot, as we try to figure out where the truth ends and lies and fabrications begin. Overall, a fast-paced first half with some fine performances and twists.