All eyes are on the upcoming horror comedy, Bhool Bhulaiyaa 2. The film helmed by Anees Bazmee has a fantastic star cast and the audiences’ expectations are sky-high from this film. 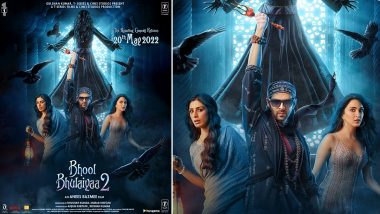 The theatrical release of Bhool Bhulaiyaa 2 is around the corner. The film has managed to generate a lot of buzz ahead of its release and movie buffs are pretty thrilled to watch it on the big screens. Let’s take a look at some of the key details below.

Cast – Other than the lead cast members, Rajpal Yadav would be reprising his role as Chhote Pandit. Sanjay Mishra, Karmveer Choudhary, Amar Upadhyay would also be seen in key roles.

Plot – Kartik Aaryan would be seen as Rooh Baba who would be dealing the supernatural activities happening in a haveli and Kiara’s character Reet that is possessed by Manjulika’s ghost.

Watch The Trailer Of Bhool Bhulaiyaa 2 Below:

Release Date – The long wait to watch Bhool Bhulaiyaa 2 has come to an end finally The horror comedy was released in theatres on May 20.

(The above story first appeared on LatestLY on May 17, 2022 12:51 PM IST. For more news and updates on politics, world, sports, entertainment and lifestyle, log on to our website latestly.com).