Kartik Aaryan, who is currently riding high on the success of his latest release Bhool Bhulaiyaa 2, reveals that the song Amije Tomar from the film is the most difficult song 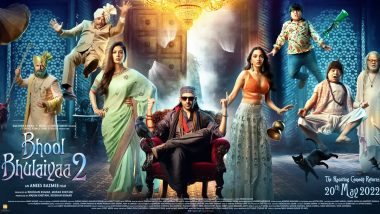 Kartik took to Instagram, where he shared a glimpse of the number. In the track, the actor, who plays Rooh baba in the film is seen doing tandav on the track, which also featured in the first installment of the film starring Akshay Kumar and Vidya Balan. Bhool Bhulaiyaa 2 Box Office Collection: Kartik Aaryan, Tabu’s Horror Comedy Is an Unstoppable Hit! Stands at Rs 92.05 Crore After Week 1.

Kartik is currently being hailed as a superstar by many critics and the audience for delivering the blockbuster of the year and is all set to impress fans with more interesting projects in his lineup including 'Shehzada', 'Captain India', 'Freddy' and Sajid Nadiadwala's untitled next.

(The above story first appeared on LatestLY on May 29, 2022 05:21 PM IST. For more news and updates on politics, world, sports, entertainment and lifestyle, log on to our website latestly.com).