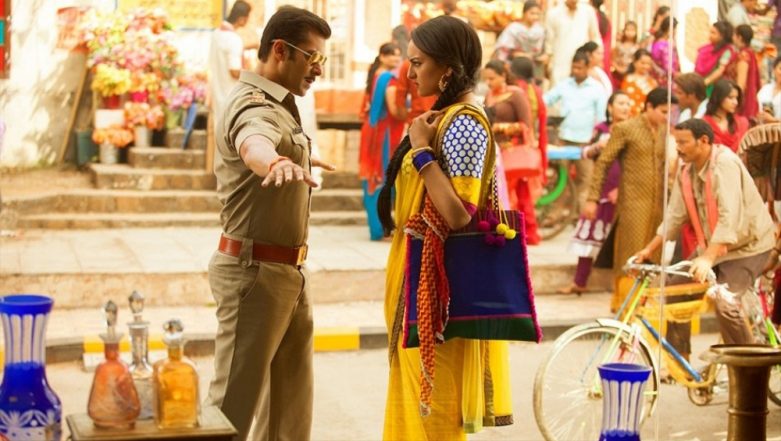 Salman Khan is all set to the screen on fire with his character Chulbul Pandey in the upcoming flick Dabangg 3. The third installment of ultra-popular Dabangg franchise is on the to-watch list of all the bhai fans already. Every detail of the film and the making is being noted by the fans. Amid this, a video from straight from the sets of the Prabhudheva directorial went viral. The video seems to be the title track of Dabangg 3. The lyrics of the title track can be heard as "Azad Parinda." Salman Khan Shares a Beautiful Picture of the Narmada Ghats from the sets of Dabangg 3.

In the video, you can see Salman Khan in his signature moustache look and those dashing glares. However, you will be surprised to find him in a casual formal shirt and denim instead of his cop uniform. The track of the song is easily audible, and you know what to expect from the title track of the film.

The song was shot in Mandleshwar, Madhya Pradesh. As per the reports, there are about 500 backup dancers roped in for this song which has been shot on a grand scale. "This will be followed by an action sequence on bikes involving Chulbul and his brother, Makkhi (played by actor-producer Arbaaz Khan). It will end with a week-long shoot in Mandleshwar," a source told a daily.

Meanwhile, the fans are advising the filmmakers to tighten the security on the sets of the film. They were disappointed to find such a major part of the movie getting leaked on the social media at such an early stage of the shoot.