There were reports that the makers might take a decision to release it on the OTT platforms instead of theatres to avoid the box office embarrassment. Earlier, they denied the speculation of releasing it on Netflix and confirmed that it will be released in cinemas only. 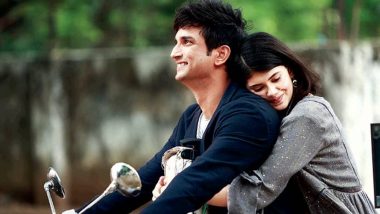 The controversies surrounding Sushant Singh Rajput and Sanjana Sanghi's Dil Bechara are getting out of hand. The remake of The Fault In Our Stars is getting all the attention but sadly, for all the wrong reasons. There are many speculations regarding the release of this romantic film for the longest time now. There were reports that the makers might take a decision to release it on the OTT platforms instead of theatres to avoid box office embarrassment. Earlier, they denied rumours that they were releasing the film on Netflix and confirmed that they will be showcasing it in cinemas only. Now, the makers have again clarified that it won't be released on Amazon Prime. Dil Bechara: Not Netflix, Sushant Singh Rajput and Sanjana Sanghi's The Fault In Our Stars Remake Will Have a Theatrical Release on May 8, 2020.

THIS IS FAKE NEWS https://t.co/L5a3SPD8ml

An entertainment portal did a report on how Fox Star Hindi is in the talks with Amazon Prime for the release. A source told the portal, "Fox Star Studios has pitched Dil Bechara to Amazon Prime. The negotiations are going on in full swing but both parties are yet to reach a consensus with regards to the economics of the deal."

The source added, "If Fox Star Studios manages to get the OTT platform to agree to the terms and money they are demanding, then the theatrical release of Dil Bechara will be shelved and it’ll directly release on Amazon Prime. If not, then it’ll release on May 8 next year as scheduled."

However, the official twitter account of Fox Star Studios took to Twitter to write, 'THIS IS FAKE NEWS.' The words written in caps were enough for the fans to understand that the movie is indeed releasing in the cinema halls and the makers are finding it hard to convince everyone. The Mukesh Chhabra directorial is as of now, slated to release on 8 May 2020.

(The above story first appeared on LatestLY on Nov 21, 2019 03:36 PM IST. For more news and updates on politics, world, sports, entertainment and lifestyle, log on to our website latestly.com).