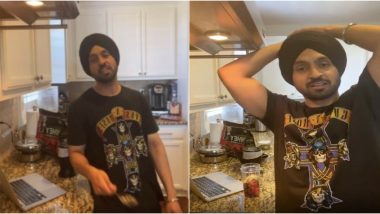 Diljit Dosanjh's Instagram account is one entertaining place. When the actor-singer is not busy commenting on his favourite celebs Kylie Jenner and Gal Gadot's posts, he makes sure to drop some amazing stuff on his timeline. Recently, the actor recently shared a rather funny video on his Instagram timeline where he got into a 'clash' with guess who? Well, don't worry it's not a troll but in fact, Amazon's virtual assistant Alexa. Wondering why Diljit isn't getting along with Alexa? Well, here's what happened. The Good Newwz actor took to Instagram and shared a video captioning it as "CLASH BETWEEN ME & ALEXA."GOAT Song Out: Diljit Dosanjh’s Peppy Punjabi Track Will Instantly Set You Grooving (Watch Video).

The video shows Diljit asking Alexa to play a certain song but unfortunately, the virtual assistant keeps getting it wrong. In the video, Diljit is seen lounging in his kitchen, sipping on a smoothie and casually asking Alexa to play his song "Clash" However, the virtual assistant fails to understand his command and eventually we see Diljit ending up saying, "O man gi oye! Ae mera dimaag khaagi dekh (She finally got it. Ate my head though)." The video is sure to leave you in splits as Diljit and Alexa keep misunderstanding each other. Suraj Pe Mangal: Manoj Bajpayee, Fatima Sana Shaikh and Diljit Dosanjh Starrer to Not Skip Theatrical Release?

The video has received some amazing comments from Diljit's followers who couldn't stop laughing at his hilarious antics. A user commented on the video saying, "Seeing Diljit talk to Alexa is so wholesome." Another user “This is me trying to train my dog, and failing at it consistently!" As for Diljeet's music, he recently released his album G.O.A.T and "Clash" is the latest music video to release from the album.

(The above story first appeared on LatestLY on Aug 13, 2020 01:50 PM IST. For more news and updates on politics, world, sports, entertainment and lifestyle, log on to our website latestly.com).