Emraan Hashmi To Play A Villain In Salman Khan-Katrina Kaif Starrer Tiger 3? Five Movies To Prove Why He Will Be Best Baddie In The Franchise

Tiger 3 has apparently found its villain in Emraan Hashmi. This could be a great addition to the Tiger franchise which is toplined by Salman Khan and Katrina Kaif. Why do we say so? Let us give you five examples of Emraan's movies that prove he could be the best baddie in the franchise. 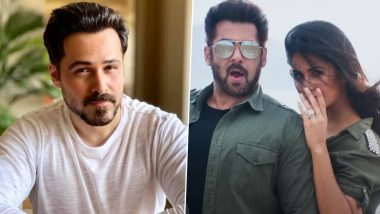 Rumour mills suggest that Emraan Hashmi will be the villain in Salman Khan and Katrina Kaif's Tiger 3. As per a report in TOI, YRF found the actor to be apt for the role as he is quite intense. Well, honestly, this could be a casting coup. Emraan has often been called the serial kisser, a tag he has worked really hard to shed off over the past few years. He has picked minimal assignments but made them count. Emraan as a villain could be a great character to watch as the guy has played negative characters in movies. In fact, most of them had him using his cunningness to get what he wants. Tiger franchise could add the right dose of action and sleekness to his repertoire. Tiger 3: Emraan Hashmi To Play The Baddie In Katrina Kaif And Salman Khan Starrer?

We have reasons to believe so based on a few of Emraan Hashmi's movies. Let's go through five of them.

Let's begin with the film which got him a lot of attention. He played an undercover agent who tricks a girl into falling for him and manages to bust a racket owned by the girl's gangster protector. Since the story was shown from the perspective of the girl, Emraan's character came across as a ruthless person for whom the love for the girl was only for his mission. Unapologetic, determined and extreme coercive, Emraan was sinister even when he didn't go OTT about it.

The wicked, seductive, wild, brash and scheming Sunny in Murder couldn't have been done by anyone else but Emraan. He was devastatingly evil even when initially you would be forced to root for him. The best part is Emraan made it look so effortless that you are bound to rave him.

Once Upon Ay Time In Mumbaai

Emraan played Sultan, an unscrupulous and damagingly ambitious man who wanted to rule Mumbai. His hot-temper does get in the way but his evil maneuvers help him get what he wants. Hashmi is out and out bad in this film and so, this could be a perfect place for YRF to start looking if they want to know how apt Emraan would be for the villainy in Tiger 3.

Emraan is a ghost here. Yes, those who haven't watched it yet, sorry for the spoiler. He is a ghost who starts as a supportive spirit in Shaina's life but turns out to be her husband's biggest enemy. All of that was his way of taking revenge on her husband who had killed him. The shift from being a good guy to a monster ghost was completely seamless which made us wonder why isn't this guy getting better roles.

Although Emraan's role here is quite one note with not much flair, his finesse in making it even more negative wins your applause. The whole movie had everyone in grey shades and to stand out in such a narrative is a little difficult. But not for Emraan who just nails it till his last scene.

Well, these aren't the only movies that had Emraan in negative roles. There are many where the guy sets out as a bad boy and turns a new leaf. If you look at Jannat where he plays a bookie or Good Boy Bad Boy, Hashmi is unparalleled as someone on the wrong side of the law. Hence, he has a wide range of experience in being convincingly BAD!

Tiger 3 will be directed by Ali Abbas Zafar who had confirmed he has a story ready to go for the shoot. It is expected to start filming in March 2021.

(The above story first appeared on LatestLY on Feb 12, 2021 03:27 PM IST. For more news and updates on politics, world, sports, entertainment and lifestyle, log on to our website latestly.com).