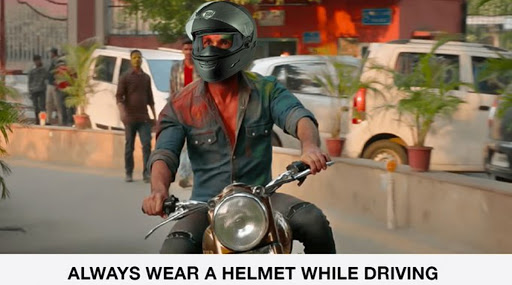 Shahid Kapoor's Kabir Singh seems to have suffered more backlash than even the original Arjun Reddy. It gets discussed and debated in every interview with everyone from the director to the actor getting slammed for it. In fact, post the release of the Hindi film, even Vijay Deverakonda had to justify his character a little more than during the release of the Telugu film. And it's not over yet. Gurugram Traffic Police has now made a meme out of one of the scenes from the film to explain rules. This scene happens when Kabir rushes on a bike to another college after someone tries to get too friendly with Preeti during Holi. Thappad Doesn’t Oppose Kabir Singh but Physical Abuse in Love, Says Taapsee Pannu

We just loved the pun here. In the scene, Shahid just takes the bike and leaves without wearing a helmet. Gurugram Traffic Police helps him wear one in the virtual world with the message that might elicit a few laughs.

It's funny how the Police handles of many cities have taken to humour to put their point across. We would like to believe its effective and next time, Kabir Singh leaves to beat up goons for Preeti, he should remember this.