IPL 2020: Mom-to-Be Anushka Sharma Cheering for Virat Kohli During the CSK vs RCB Match Is the Best Thing You’ll See on the Internet Today! (View Pics)

Pictures of Anushka Sharma cheering for her husband, the dad-to-be, ace cricketer Virat Kohli during the CSK vs RCB match that happened yesterday are all over the internet. 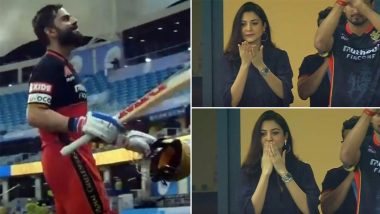 Pictures of Anushka Sharma cheering for her husband, the dad-to-be, ace cricketer Virat Kohli during the CSK vs RCB match that happened yesterday are all over the internet. One can see how mom-to-be Anushka couldn’t stop clapping, blowing kisses as he played one of his best matches. RCB Captain Virat Kohli scored an unbeaten 90 against MS Dhoni’s CSK. It is the highest score by any captain against CSK. Virat Kohli is New Mr. 360-Degree! Fans Praise RCB Captain for his Sensational Knock of 90* Against CSK in Dream11 IPL 2020.

Besides Virat Kohli and his teams impressive performance, netizens could not take their eyes off pregnant Anushka Sharma, who was seen cheering for her man from the stands. She was indeed one perfect cheerleader and her pictures from last evening are all over the internet. Anushka was looking radiant in a flowy black dress with bell sleeves. Netizens just cannot get enough of Anushka’s priceless reaction from last evening’s match. Take a look at those pictures and what netizens have to say. Anushka Sharma is Pregnant! Virat Kohli Makes the Big Announcement Via an Adorable Post.

Behind every successful man there is a woman. Virat Kohli played very well because of motivation of his beautiful wife #anushkasharma . #Kohli #RCBvsCSK 👍👍👍👍👍 pic.twitter.com/IuFDRIY3yH

Congratulations Anushka Sharma. You take all the credits today. ❤️ Virat Kohli played well today only because of you.

Yes if he can fail because of her, he can succeed because of her too. Logics.#ViratKohli#AnushkaSharma pic.twitter.com/nutqX7KZ8Z

Netizens Call Her The Lucky Charm

Anushka your presence is Much lucky for VK and RCB fans.And that glow mashallah✨💫.#AnushkaSharma pic.twitter.com/zR9nEQds0L

The glow🥺♥ AND THAT PROUD SMILE 😍❤🥰 #AnushkaSharma pic.twitter.com/lSvl1RZA0h

All Hearts For Virushka

Anushka Sharma has been Dubai ever since the beginning of IPL 2020, but was not seen in the earlier matches of RCB. Anushka and Virat Kohli are expecting their first child together. The actress is due in January 2021. This is her first public appearance post the announcement of her pregnancy.

(The above story first appeared on LatestLY on Oct 11, 2020 09:07 AM IST. For more news and updates on politics, world, sports, entertainment and lifestyle, log on to our website latestly.com).