Is Sandeep Aur Pinky Faraar Heading For a Digital Release? Here's What Arjun Kapoor Has to Say!

Considering there is no clarity as to when the lockdown will be lifted and public spaces such as malls and theatres will function like regular, several filmmakers have been toying with the idea of releasing their films digitally. 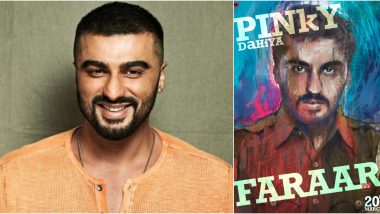 Coronavirus lockdown resulted in the delay of many Bollywood film which were slated to release in the months starting from March. Among these releases was also Arjun Kapoor and Parineeti Chopra starrer Sandeep Aur Pinky Faraar which has already been a much-delayed project. The film was slated for a March 20 release initially. After the announcement of a lockdown, YRF confirmed that the film is being postponed. Considering there is no clarity as to when the lockdown will be lifted and public spaces such as malls and theatres will function like regular, several filmmakers have been toying with the idea of releasing their films digitally. Dibakar Banerjee Says ‘Audiences Will Have a New Kind of Hero’ After Watching the Climax of Sandeep Aur Pinky Faraar.

Recently, Arjun Kapoor spoke about the same in an interview and discussed what lies ahead for his Dibakar Banerjee directorial. Speaking to Pinkvilla, Arjun said, "I’m not involved in the selling and buying of any of my films. My producers are more involved with that bit. That is a reality for certain films that might choose that path. I don’t see anything wrong with that."

While Arjun didn't give any clarity over the film's release, he also said that the digital mediums are still not for the masses yet given the situation, not every film would wait for the lockdown to end and theatres to reopen.

The situation seems to be the same not just in Bollywood but also Hollywood. Recently, the Academy Awards also made an announcement about films that will be heading for a streaming-only release amid this time to be deemed eligible for the awards. Coronavirus Outbreak: Sandeep Aur Pinky Faraar Starring Arjun Kapoor and Parineeti Chopra Gets Postponed.

(The above story first appeared on LatestLY on May 05, 2020 11:53 PM IST. For more news and updates on politics, world, sports, entertainment and lifestyle, log on to our website latestly.com).