Kaagaz is a Zee5 social drama that is written and directed by Satish Kaushik, based on real-life events. Pankaj Tripathi plays the main lead, while the movie also stars Kaushik, Monal Gajjar, Amar Upadhyay and Mita Vashisht. Salman Khan Films is one of the producers. 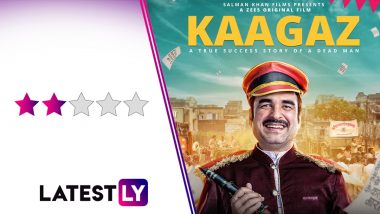 Kaagaz Movie Review: Satish Kaushik's new film, Kaagaz, talks of an unusual crime that is less discussed but prevalent in certain portions of our country. It revolves around situations where very much alive people are declared 'dead' on papers by others for their own nefarious purposes. In the case of Bharat Lal (Pankaj Tripathi), it was his own relatives that proved him dead on papers so that they have complete ownership of his land. Kaagaz: Pankaj Tripathi Says Satish Kaushik Directorial Is a Satirical Take on a Real Issue.

Bharat Lal, who owns a instrument shop in a village in UP, is a good-hearted man, who won't even kill a rat that has been bothering his shop's goods. So imagine his shock to see his own kin 'kill' him on records for their greed. At first, his entire village took the matter lightly and made jokes on his plight, and Bharat was merely just irked by the turn of events. But the red-tapism and rampant corruption add to his woes of trying to prove himself alive, which later also affects his domestic life with his wife Rukmini (Monal Gajjar).

From staging dharnas to committing kin kidnapping to even entering politics, Bharat Lal tries all ways to make the system accept that he is alive. Whether he proves successful in his endeavor is what the rest of Kaagaz is all about.

Kaagaz begins in 1977, towards the end of Indira Gandhi's Emergency, though the situation could have easily been placed in today's times. The reason for the film to use the era is that Bharat Lal is based on the turmoils of a real-life figure, Lal Bihari, who had to spend 19 years to prove himself alive. He even added the epithet 'Mritak' (deceased) to his name as a protest. The real Lal Bihari also appears towards the end of the film, as Kaagaz pays tribute to his struggles and social activism.

The woes of Lal Bihari, or in this film, Bharat Lal, surely make for a heartrending saga. Through Kaagaz, Kaushik hammers hard the system's reliance on red-tapism over human factors even when a life is at stake. The fact that it is always the common man who has to suffer such transgressions isn't something Kaagaz overlooks. With an excellent Pankaj Tripathi doing a great work of making Bharat Lal a sympathetic figure, Kaagaz does get its heart right. OTT Releases of the Week: Japanese Show Lupin on Netflix, Hailee Steinfeld’s Dickinson Season 2 on Apple TV+, Pankaj Tripathi’s Kaagaz on Zee5 and More

What it doesn't always get right is the handling. Satish Kaushik is a seasoned director and has made some very emotional entertainers in the past. Not all of them have aged well, including his big hits like Hum Aapke Dil Mein Rehte Hain and Tere Naam, mostly for their treatment and outdated tropes. Kaagaz has the same problems - it is presented in a melodramatic manner, that makes it more appealing to the soap era tangent of viewers. At the same time, he couldn't resist adding in an item song featuring Sandeepa Dhar.

There are tonal issues too, Kaagaz's satirical attempts to see Bharat Lal's troubles in a lighter vein don't always work out, especially his idea to kidnap his school-going nephew to get an FIR registered against him that, which not only doesn't show him in a good light (even if it is out of desperation), but jars bizarrely when compared to the emotional scenes that come before and after. It is also edited in an unimpressive manner, despite keeping the runtime within two hours. Just check out a simple conversation scene at the beginning of the movie that features so many cuts that it is distracting!

- A Story Worth Telling

- The Treatment and the Writing

Pankaj Tripathi is surely the flavour of the season, but there is a limit to what an actor can do. His sincere performance does make Kaagaz worth a watch; we only wish the rest of the aspects of the film would have given the right support. Kaagaz is streaming on Zee5.

(The above story first appeared on LatestLY on Jan 07, 2021 10:01 AM IST. For more news and updates on politics, world, sports, entertainment and lifestyle, log on to our website latestly.com).