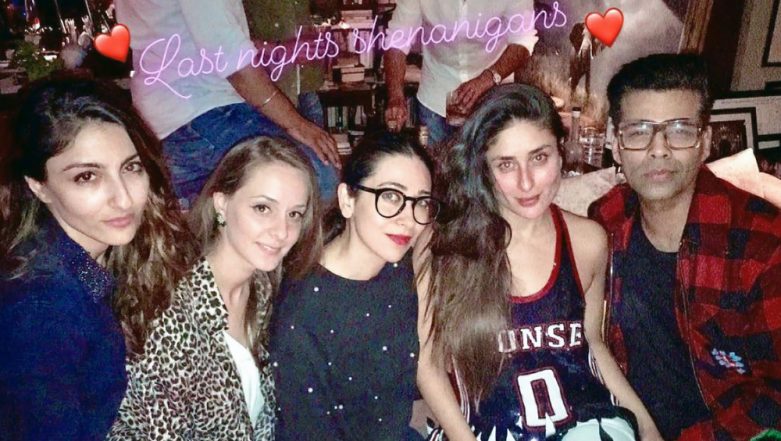 Kareena Kapoor Khan is venturing out on a new journey of an RJ and looks like the actress hosted an intimate party to celebrate that. The show named, 'What Women Want' was launched yesterday and will be aired on radio from tonight. Kareena was present at her radio show's launch yesterday and hosted a bash straight after that. Amrita Arora, Karisma Kapoor, Karan Johar and a few others joined in the celebrations. This inside picture from Bebo's party at her residence last night is doing the rounds on social media and it clearly proves that the diva and her gang had a rather great time. Bebo is acing the pout game as ever and so is her BFF Karan Johar! Kareena Kapoor Khan’s Recent Outing Proves ‘She Doesn’t Do Fashion but She’s Fashion’ - View Pics.

Check out the new promo of Kareena's radio show, 'What Women Want', here-

She also interacted with a section of media after the launch of her show. In an interview with Anupama Chopra, Kareena revealed how her show is going have a segment called, "Bebology" where she will be seen giving her tips and advice to guests who will be coming on the show. She's shot with Sunny Leone, Mallika Dua, Masaba Gupta among the likes of others. Talking about Bollywood, Bebo has been roped in for Good News and Takht.