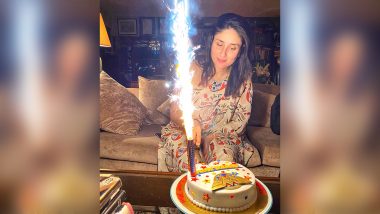 Kareena Kapoor Khan celebrated her 40th birthday on September 21. Her sister Karisma Kapoor had shared a series of pictures from the mid-night birthday celebrations and netizens were happy to see the soon-to-be mommy ringing in her birthday with her family. Kareena and Saif are expecting second child and hence even this celebration was also extra special. Karisma has shared another pic in which ‘Super Mom’ Kareena is seen slicing her birthday cake. Kareena Kapoor Khan Turns A Year Older Today! Sis Karisma Kapoor, BFFs Malaika and Amrita Arora Extend Birthday Wishes Saying ‘Fabulous At 40’.

While sharing the pic, Karisma Kapoor captioned it as, “Precious Moments with our birthday girl”. There were many who extended birthday wishes to the gorgeous actress. Her besties Malaika and Amrita Arora and sis Karisma rightly described, ‘Fabulous at 40’. In this pic, you’ll see how Kareena is looking radiant even sans makeup. She has kept her look simple yet chic in a comfortable outfit. Take a look at the photo below: Kareena Kapoor Khan Birthday Special: Ethnic Grandeur Is Just Another Forte of Begum Jaan’s Trailblazing Fashion Arsenal!

On the work front, Kareena Kapoor Khan was last seen in Angrezi Medium. Her upcoming project is Laal Singh Chaddha in which she’d be once again sharing screen space with Aamir Khan. Directed by Advait Chandan, this film is a remake of the Hollywood classic Forrest Gump. The film is slated to be released during the time of Christmas next year.

(The above story first appeared on LatestLY on Sep 22, 2020 09:28 AM IST. For more news and updates on politics, world, sports, entertainment and lifestyle, log on to our website latestly.com).