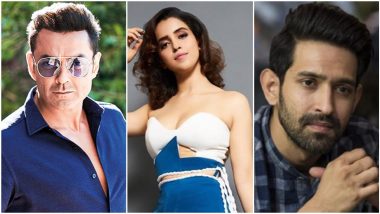 After the huge success of Aashram, Bobby Deol is gearing up for yet another interesting venture with Shah Rukh Khan's Red Chillies Productions. The actor will collaborate with the production house for the second time after their Netflix outing in Class of '83. The new project titled 'Love Hostel' will also star Sanya Malhotra and Vikrant Massey in lead roles. The crime thriller directed by Shankar Ramen revolves around a young couple on run. Bobby Deol On Failure & Success: I Had Absolutely Nothing and My Children Started Asking Why Don't I Go To Work!

As per the brief mentioned in their announcement, the story is about star-crossed lovers who are in being hunted by a ruthless mercenary. The couple looking for a fairytale ending get caught up in a survival tale that's loaded with power, money and principles. The premise definitely sounds intriguing and we are excited to see Vikrant Massey team up with Sanya Malhotra for this rustic, crime thriller. After playing a happy-go-lucky man in Ginny Weds Sunny, it's time he returns to the genre that's not really an alien territory for him. Class of 83 Movie Review: A Pensive Bobby Deol and the Talented Newcomers Fight a Hard Battle Against Hazy Writing and Rushed Editing.

We're excited to present our next film with @DrishyamFilms, #LoveHostel - a story about a spirited young couple on the run!

Bobby Deol is likely to play the ruthless mercenary and this would mark his second antagonist act after Ashram. Director Ramen has previously helmed 2017 release Gurgaon which was another neo-noir thriller.

(The above story first appeared on LatestLY on Oct 29, 2020 12:48 PM IST. For more news and updates on politics, world, sports, entertainment and lifestyle, log on to our website latestly.com).