Madhuri Dixit Nene Fascinated by K-Pop Dance Style, Says ‘Any Kind of Dancing Is Dancing for Me’

Madhuri Dixit Nene is fascinated by the currently popular K-pop dance style. She will soon be seen judging the dance based reality show Dance Deewane 3. 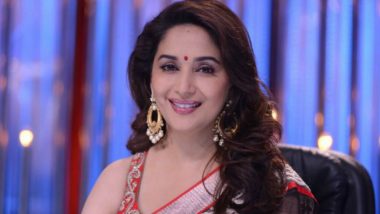 Bollywood veteran Madhuri Dixit Nene is fascinated by the currently popular K-pop dance style. "It is a dance form because there is choreography. There is movement of the body, so it is a dance form. The youngsters are hooked on it and any kind of dancing is dancing for me," Madhuri told IANS. Madhuri Dixit Signs her Second Digital Outing with Tumbbad Creator's Next, Saheli?

"There are so many dances coming in that we are getting to see. Something like free style dancing, somebody did experimental dancing. So, it's their interpretation of dancing and as you innovate in dance I think we will get to see various dance forms. It is always fascinating to see that," she added. Madhuri Dixit Wishes Husband Shriram Nene on His Birthday with a Romantic Instagram Post.

Madhuri started dancing at the age of three and is a trained classical dancer who has learned Kathak. The actress, who is fondly called as the Dhak Dhak Girl on Bollywood for her moves, shot to superstardom with her numerous blockbusters in the eighties and the nineties, most of which had superhit dance numbers.

The actress will soon be seen judging the dance based reality show Dance Deewane 3.

(The above story first appeared on LatestLY on Feb 18, 2021 10:41 AM IST. For more news and updates on politics, world, sports, entertainment and lifestyle, log on to our website latestly.com).