Mahesh Bhatt Birthday: From Saaransh To Chahat - Top 10 Highest Ranked Movies Of The Director On IMDb

Mahesh Bhatt is an exceptional director and that's why it was easy to feel betrayed when Sadak 2 released in the way that it did. On his birthday, let us check which movies of the director got the highest ranking on IMDb 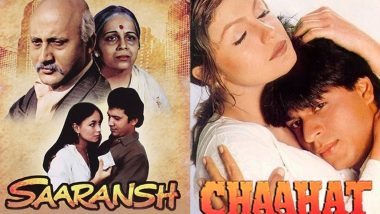 Mahesh Bhatt has been a huge name in the 90s, thanks to the kind of issues he picked in movies and his directorial sense. One of the biggest assets of Bhatt is he knows how to pick his supporting cast. You will notice that often even when the leads are not great with their acting chops, the character actors would do a fascinating job.  What was also interesting about him was he believed in variety. If there's an Arth and Naam, there's also Hum Hain Rahi Pyaar Ke and Dil hai Ki Maanta Nahin. That's what made him quite popular in that decade before he hung up his boots only to relinquish them for a strange movie called Sadak 2. Emraan Hashmi Confirms Mahesh Bhatt-Mukesh Bhatt Split; Says ‘Equations Change, Nothing Is Permanent’

Anyway on his birthday, we decided to dig up IMDb to know how moviegoers have ranked Mahesh Bhatt's movies. Number 9 really shocked us! P.S. we are only taking movies directed by him! Mahesh Bhatt Moves Bombay HC to File a Defamation Suit Against Luviena Lodh over Her Video That Alleges Harassment by Sadak 2 Director

Now that doesn't surprise us at all! What a brilliant direction, what brilliant performance by Anupam Kher, Rohini Hattangadi and others. This movie is just stupendous!

Zakhm takes a leaf out of Bhatt's own life and we can only be shocked at what was shown in the film. Be it Ajay Devgn or Pooja Bhatt or Kunal Kemmu, Bhatt managed to bring out the best of everyone.

Arth rivaled Silsila at the theatres and won. That says a lot about how much Bhatt's direction skills made this movie an exceptional treat.

Naam is such an underrated gem. A brother's struggle, a man's fight to prove himself, a mother's dilemma to see her son taking the wrong route and so much more... a fantastic movie.

Now, who doesn't love Hum Hain Raahi Pyar Ke? Even today, the jokes make you laugh which says a lot about how the movie was written and presented.

A remake of It Happened One Night, Dil Hai Ki Maanta Nahin is pure love. Be it the eccentric Anupam Kher or the bratty Pooja Bhatt or a temperamental Aamir Khan, this movie has our heart.

Sadak was ahead of its time showing love between a taxi driver and a girl sold to a brothel. Great music and a good story!

Aashiqui, as the name suggests, is love as we knew in the 90s. Snatching glances, singing serenading songs, falling in love....everything was uncomplicated and pure. That's what Mahesh Bhatt executed perfectly - Innocence!

The shockers begin. This is the second weakest film of Mahesh Bhatt's weakest after Sadak 2 of course. Two Shah Rukh Khan and both hamming way to glory...not a great movie!

Chaahat had a good premise but very weak execution. The melodramatic performances by actors in it ruin the story completely. But guess people liked watching Shah Rukh Khan in it!

(The above story first appeared on LatestLY on Sep 20, 2021 08:10 AM IST. For more news and updates on politics, world, sports, entertainment and lifestyle, log on to our website latestly.com).