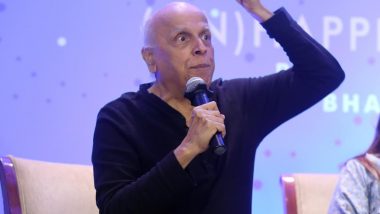 A clarification issued on behalf of Mahesh Bhatt has declared that the filmmaker is not involved with IMG Ventures, the company that allegedly blackmailed and sexually assaulted a number of women on the pretext of providing modelling opportunities. Sushant Singh Rajput Death Probe: Mahesh Bhatt Records His Statement, Reveals the Late Actor Was Never Approached for Sadak 2.

There were reports that National Commission for Women (NCW) has taken cognisance of a case against Sunny Verma, promoter of the company, and issued notices to certain Bollywood celebrities including Bhatt, named in the complaint filed by a social activist.

Vishesh Films, the production house owned by Mahesh Bhatt along with his brother Mukesh Bhatt, has now issued a clarification stating that they plan to take legal action against those who have named the filmmaker in various articles.

"The allegations made against our client Mr Mahesh Bhatt are made without verification of true and correct facts. We are taking legal action against all the news agencies who have reported false and defamatory articles," said Ameet Naik, legal counsel and advocate for Vishesh Films. The complaint against Sunny Verma was filed by People Against Rape in India (PARI) founder Yogita Bhayana. Alia Bhatt Misses Her Father Mahesh Bhatt During COVID-19 Lockdown, Shares a Cute Throwback Pic.

According to the complaint, Sunny Verma, promoter of IMG Ventures, has been blackmailing and sexually assaulting a number of women on the pretext of modelling opportunities. "Number of TV and film actors are also promoting his company in a video advertisement," Bhayana's complaint said.

(The above story first appeared on LatestLY on Aug 02, 2020 10:35 PM IST. For more news and updates on politics, world, sports, entertainment and lifestyle, log on to our website latestly.com).