It wasn’t any easy journey for this beauty in showbiz. Just like many other actresses and models have been body shamed owing to dusky complexion, even Chitrangda Singh faced discrimination owing to her skin colour. 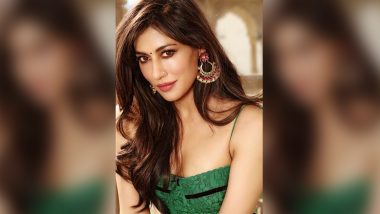 Chitrangda Singh is one of the most popular models and actresses. Her beauty and charm has won hearts across the country. Before venturing into the world of cinema, this 44-year-old beauty had started her career as a model. She worked with some of the popular brands and later gained recognition with the music album “Tum To Thehre Pardesi”, sung by Altaf Raja. She was featured in several music videos later. However, it wasn’t any easy journey for this beauty in showbiz. Just like many other actresses and models have been body shamed owing to dusky complexion, even Chitrangda faced discrimination owing to her skin colour. Malavika Mohanan Shares a Thought-Provoking Post on How People Differentiate Between ‘Beautiful’ and ‘Ugly’.

In an interview, model-actress Chitrangda Singh, revealed the issues she faced in the initial days of her career. She told BT, “I know the feeling of living life as a girl with dusky complexion. This is not something that people will say directly to your face. You can only sense it. I have been through the biases, especially while growing up in the north. So, with my post, I just wanted to say that one needs to feel beautiful in their own skin.”

Chitrangda Singh shared how she lost on modelling assignments due to her skin colour. She stated, “I did lose out on modelling assignments. In fact, when I lost out on one ad in the initial days of my career, I was specifically told the reason as it had come down to selecting between two people for the part. Luckily, the audition that I did for a product was seen by Gulzar saab, who got me on board for his music video. I realised that not everybody goes out looking for white-skinned people here.” Sai Pallavi Rejects a Fairness Cream Ad Deal Worth 2 Crores and All We Can Say is 'You Go Girl!'

On the work front, Chitrangda Singh will next be seen in Bob Biswas in which Abhishek Bachchan would be seen in titular role. Directed by Diya Annapurna Ghosh, the shooting has been stalled owing to coronavirus pandemic.

(The above story first appeared on LatestLY on Nov 21, 2020 10:07 AM IST. For more news and updates on politics, world, sports, entertainment and lifestyle, log on to our website latestly.com).