The two officially tied the knot with each other three years back on May 10, and have been painting the town red ever since then. The couple is quite adorable on social media, and they often serve couple goals for their fans. 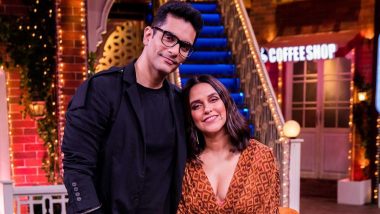 Neha Dhupia and Angad Bedi surprised all their fans and media with their wedding announcement back in 2018. The two officially tied the knot with each other three years back on May 10, and have been painting the town red ever since then. The couple is quite adorable on social media, and they often serve couple goals for their fans. Soon after their wedding announcement, the loverbirds also welcomed baby Mehr into this world. These Pictures of Neha Dhupia and Angad Bedi's First Appearance as a Married Couple Are so Damn Cute.

Neha Dhupia had shared a picture from their wedding ceremony and captioned it as, "Best decision of my life.. today, I married my best friend. Hello there, husband! @angadbedi " Angad also announced the wedding and wrote, "Best friend.. now Wife!!! Well hello there Mrs BEDI!!!" The two are perfect for each other, and their fans love to see the couple express their love through Instagram posts. Neha Dhupia Gets Love From Husband Angad Bedi As He Says 'Sun Meri Baat, It's My Choice' in a Mushy Post!

Today on their third wedding anniversary, take a look at 5 of their adorable pictures:

This super adorable picture of Neha, Angad and baby Mehr is from Holi 2021. The couple is all smile as they pose for the camera after playing with colours.

The power couple looks stunning in this picture. While Neha looks gorgeous in a golden ensemble, Angad is looking dashing in a blue suit. The two look super adorable as they hug each other cutely.

Neha and Angad went on a vacation, and made sure they share amazing pictures from their vacation. The two took some amazing selfies which made it to the Gram!

Neha captured a really cute moment where one can see Mehr walking with Angad. While Neha is busy taking the selfie, Angad can be seen carefully holding Mehr's hand.

Family Pictures Are The Best!

While Neha was wishing her parent a happy anniversary, she shared a very cute family picture. In this monochrome photo, you can see her kissing Angad's arm which shows how much she loves him.

Neha Dhupia and Angad Bedi had officially announced the pregnancy news in August 2018. She had shared the news with the world with a bunch of adorable pictures. The couple is now busy spending time with the little one, and focusing on their work simultaneously. Wishing the lovely couple a very Happy Anniversary.

(The above story first appeared on LatestLY on May 10, 2021 11:45 AM IST. For more news and updates on politics, world, sports, entertainment and lifestyle, log on to our website latestly.com).