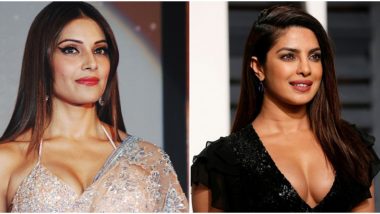 Priyanka Chopra was the first choice for No Entry (Photo Credits: Instagram)

Boney Kapoor's multi-starrer No Entry completes 15 years of its release and it still continues to find a place in our list of favourite Bollywood comedies. The film starring Salman Khan, Anil Kapoor, Fardeen Khan, Bipasha Basu, Lara Dutta, Esha Deol and Celina Jaitley enjoyed a great run at the box office and its success even prompted the makers to plan its sequel. While the same plan has currently taken a back seat, did you know the idea for the original movie was drafted keeping Priyanka Chopra in mind? No Entry 2: Anees Bazmee Reveals He's Waiting for Salman Khan to Give his Nod to the Sequel's Story.

Boney Kapoor in his recent conversation with Bollywood Hungama revealed how he wanted to Priyanka Chopra for Bipasha Basu's role. The Raaz actress wasn't the first choice of the makers and it was only after PeeCee rejected the role that they approached Bipasha for it. “Priyanka Chopra was to do the role of the seductress Bobby. However, she had to opt out of the film as she was already doing Mujhse Shaadi Karogi (2004). I had given the cheque to Priyanka and later, when she exited the project, her manager returned the amount," said Boney Kapoor when asked why Priyanka couldn't be a part of his multi-starrer.

Interestingly, the original idea also had Sanjay Dutt playing Salman Khan's role but that plan never got materialised. Eventually, the makers roped in Salman, Anil Kapoor and Saif Ali Khan for the comedy. However, after the Cocktail actor discussed his reservations, Fardeen Khan was finally asked to come on board and rest, as they say, is history.

(The above story first appeared on LatestLY on Aug 26, 2020 12:25 PM IST. For more news and updates on politics, world, sports, entertainment and lifestyle, log on to our website latestly.com).