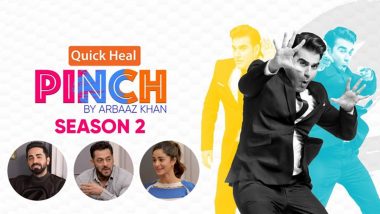 Arbaaz Khan will be back as host on "Pinch" season 2 with new guests including Salman Khan, Ayushmann Khurrana, Kiara Advani, Ananya Panday, Farhan Akhtar, Farah Khan, Tiger Shroff, Anil Kapoor, Rajkummar Rao and Jacqueline Fernandez. Pinch season 2 will stream from July 19 and the trailer launches on Wednesday. On how season 2 will be different, Arbaaz reveals: "Since season 2 will be the essence of the first season itself, it'll probably be different because we will have different celebs come on the show. Vicky Kaushal and Katrina Kaif To Go Public With Their Relationship on Koffee With Karan’s Upcoming Season – Reports.

Their point of view would be different and after doing the first season we have understood what are the improvements or the areas that we would like to get better at in terms of the questions we pose and how we promote or project this show. So in many ways it'll be bigger and bolder.  While the essence remains the same, we have new things to add in this season for sure." He goes on: "Things that we changed included making our show more inclined towards Hindi, so that the audience could relate to it more. Bigg Boss 13’s Asim Riaz Calls Salman Khan’s Reality Show a Life-Changing Experience.

We asked and expected answers in Hindi, so that it could reach maximum people." This season will have Salman Khan as the first guest, Arbaaz adds. "This time the season opener is going to be Salman, this is something we had pre decided. Last season we consciously didn't have him on the show for the simple reason that being his brother and since I was hosting for the first time I wanted to do a kind of show where I wanted him to be convinced that it's going to be something that he would be happy to be a part of.

At that time, I felt if we ever had to go into a season 2, he would be like an ace for that season. Fortunately season 1 was well received. He saw it and really liked it and now he was more willing to be a part of this show than to be here just because I happened to be hosting it. It feels really good that he has come on board on the basis of really liking what he saw earlier," says Arbaaz.

As the guests in the show have to react to social media comments or trolls, at certain times there is a possibility that they might not like the idea. On this he replies: "Most of the stars are extremely mature when it comes to social media. They have their own way to deal with negativity, trolls etc. All I can say is, most of them are extremely sporting and can even find some fun and maybe something concrete in the criticism or trolling that they face. They have a take on it. It's good to see that most of them know that social media and some of the negativity and trolling comes with the territory they belong to and they don't let it get into their skin. They know how to deal with it."

While the celebs are at certain times hesitant in sharing about their personal experience, how does Arbaaz as a host make them comfortable with such questions? "Most of the ones who come on my show are comfortable sharing the personal and professional experiences with me. Also, they understand the show, so even if my show is called Pinch, in the worst case scenario, they are okay with answering all the questions. If they're uncomfortable, which is on a rare occasion, we bypass that."

He adds on how the show is going to deal with the issue of cyber stalking. "I agree that cyberbullying has become a nuisance and people shouldn't take it lightly because it does have an impact on people's mental health. Some of them who are vulnerable can come under the pressure, and take drastic steps, and the ones who cannot handle face mental issues and even feel suicidal. So, through our show we guide these young people who idolise stars, about how to protect themselves, what are the means and how to face such trollers, either by consulting a family member, or by complaining about it."

Check Out Pinch Season 2 Trailer Below:

On replying how he would react to the social media trolls if he was a guest on the show, Arbaaz says: "If I was on the show as a guest, I would be a little more prepared, going by what the show is all about. I would be comfortable answering most of the questions or negativity from social media. I can deal with negativity because I have found a way to either find humour or a perspective that controls me from overreacting. If the criticism is concrete then maybe I can learn something from it, I can also be appreciative of it. But if it is just a baseless statement then I would have a different approach to it." The show streams on Zee5 and QuPlayYouTube.

(The above story first appeared on LatestLY on Jul 14, 2021 03:01 PM IST. For more news and updates on politics, world, sports, entertainment and lifestyle, log on to our website latestly.com).