Priyanka Chopra and Nick Jonas Have a ‘Gay’ Connection, Know How!

Did you know that Nick Jonas was rumored to be gay? 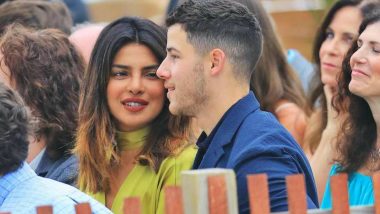 Priyanka Chopra and Nick Jonas are here in Mumbai and their fans are already rooting for their marriage. The couple has been hinting to a serious relationship between them since their bonding in US. The Hollywood actor-singer is 10 years younger than the 35-year-old desi girl but that does not matter to the people in true love! Since the couple has started being all mushy about themselves in public, more and more curiosity has surrounded around their lives. Now, did you know that they had a 'gay' connection too? Read on exactly to see what we mean to say!

So, all the PeeCee fans know that she was seen in Abhishek Bachchan-John Abraham starrer 'Dostana'. In the film, John and Abhishek act and fool around with Priyanka claiming that they are 'gays'. Even though the truth is revealed to her in the end, the initial comic scenes between them and PC's reaction to them were loved by the audience.

Did you also know that Nick has been popularly known as a 'gay icon'. Even though that's not the case with the star performer, he says in an interview to The Sun that he is still proud to be termed as a gay icon. Jonas revealed that how his gay sex scene in a program fueled the rumors of him being gay, despite not being one. He also was then favourite amongst the gay communities. We wonder if Nick has seen this film of PC somehow!

(The above story first appeared on LatestLY on Jun 26, 2018 04:38 PM IST. For more news and updates on politics, world, sports, entertainment and lifestyle, log on to our website latestly.com).