Radhe: Salman Khan Promises Fans He Will Not Repeat What He Has Done Before in His Upcoming Film, Says 'You Can Expect Something New'

Salman Khan promises fans he will not repeat what he has done before, in his new film Radhe: Your Most Wanted Bhai. The action thriller is the superstar's Eid bonanza for 2021, and scheduled for a digital pay-per-view release in India on May 13. 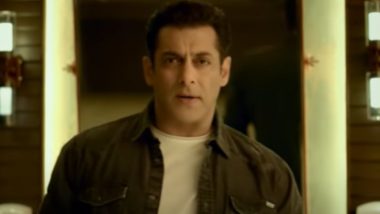 Salman Khan promises fans he will not repeat what he has done before, in his new film Radhe: Your Most Wanted Bhai. The action thriller is the superstar's Eid bonanza for 2021, and scheduled for a digital pay-per-view release in India on May 13. Salman, who is also a producer of the film, is candid enough to say he will lose money on Radhe and, with apology to theatre owners, adds that he plans to re-release the film on big screen once normalcy returns. Radhe Song Seeti Maar: Salman Khan And Disha Patani Feature In A Terribly Choreographed Hindi Version Of Allu Arjun's Hit Number From DJ (Watch Video).

"You can expect something new. You can expect something different from Tiger, Dabangg, Bodyguard, Wanted. It is a new film. We will not repeat what we have done before. See and tell me what's new, apart from me! I am the same old Salman that you have been seeing since Maine Pyar Kiya," he told IANS. Radhe: Salman Khan Fans Are Already Making Plans To Watch The Film Both At The Theatres And On ZEEPlex.

With the Covid pandemic paralysing cinema business in India, the film will primarily reach out to fans in the country through pay-per-view release. The actor is candid in confessing that he has no hope in terms of the film making big money post-release. "We will get the lowest numbers out of Radhe. We may not even cross Rs 10-15 crore. Whoever wants to be happy with the lowest number, can be. Some people will be happy with my highest numbers and some with my lowest. We will lose money on Radhe and box office collections are going to be almost zero, but we are still going ahead with (releasing) Radhe," he says.

He feels that this is the right time to release the film. Once the situation is better and the theatres open, Salman plans to re-release the film in theatres. "I apologise to all the theatre owners that we are doing this film now but it is the right thing to do. The intention was to release as soon as the pandemic is over but it doesn't seem to get over. If you remember, a few months ago on social media they were requesting that film comes on Eid in theatres. Which we agreed to because they said 1000 single screens have shut down. We agreed as they thought that getting Radhe on screens would get the crowds back and theatres would be functional, but that did not happen. Now the film is releasing on OTT, abroad and in 20-25 theatres that are open here. Once the theatres open, even after doing this OTT release, if they (audience) like the film, they will want to go and see the film in theatres. Also, there is a particular audience that does not watch stuff on OTT. We will do a release in the theatres as well," he says.

The conversation moves to how he comes on board with a script. Salman says: "When I hear a script, if I do not want to leave the other films that I have signed and want to do that film as soon as possible, I don't do it. I have to like the script in the first narration and then things can be added. If I think it's like, ‘okay' or ‘may be', I would never touch it," he says. The actor says he wants to work across genres including comedy but is not getting the right script.

"I am not getting anything that is better than what I have done -- like Partner, Ready, or Bodyguard, which was in action genre but there was a plot. I don't want to do a frivolous comedy. If I do a comedy, it will be like -- when Ready released people said it was Anees Bazmee's Hum Aapke Hain Koun!" he says.

On working in the comedy genre, he adds: "The films I have done (include) Andaz Apna Apna, No Entry and Hello Brother. If I do something, it should be something better than what I have done earlier." Eid this year is going to be different, and Salman urges fans not to gather outside his house or any other actor's house.

"It will be very different. Everyone will be in their own rooms. I live downstairs and mum and dad live upstairs. Family like my brothers and sisters will come. I hope there is no crowd outside my house or any star's house. Nobody should be there," he says.

(The above story first appeared on LatestLY on May 10, 2021 10:47 PM IST. For more news and updates on politics, world, sports, entertainment and lifestyle, log on to our website latestly.com).