After Ashwiny Iyer Tiwari's Bareilly ki Barfi, Kriti Sanon and Rajkummar Rao will collaborate once again for a comedy titled Second Innings. The film will be produced by Dinesh Vijan. 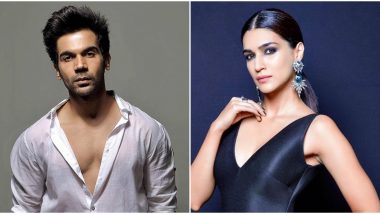 While Rajkummar Rao eagerly waits for his next release, Chaalang, and Kriti Sanon has a rather special project, Mimi in her kitty as well, the duo together is excited to collaborate once again for 'Second Innings'. While their new collaboration was earlier announced by producer Dinesh Vijan, the movie has finally bagged its official title. You can tag this as small progress made by the team while they patiently wait for the lockdown to be lifted. Kriti Sanon Gives 'Black Widow And Catwoman' Like Vibes In This Dabboo Ratnani Photo-Shoot, Actress Asks Filmmakers To Cast Her In a Superhero Film!

Film's director Abhishek Jain confirmed the film's title while also elaborating on how they were planning to shoot in March this year but had to postpone their schedule due to coronavirus outbreak in the country. The team is now waiting for things to get back to normal so they can start working on the project very soon. The film would mark Kriti and Rajkummar's second outing together after Ashwiny Iyer Tiwari's Bareilly ki Barfi which was a box office success. Lockdown Diaries: Rajkummar Rao Turns Into a Perfect Hairstylist for His Lady Love Patralekhaa (Watch Video).

The film will see Rajkummar and Kriti adopt parents to fill in the void in their lives but they would soon start realizing the real problem. It also stars Paresh Rawal and Dimple Kapadia who will play the couple's adopted parents on-screen. The movie is expected to tackle another social issue and details of which haven't been shared by the makers.

(The above story first appeared on LatestLY on Apr 27, 2020 01:48 PM IST. For more news and updates on politics, world, sports, entertainment and lifestyle, log on to our website latestly.com).