The viewers can rent the movie in 4K quality for Rs 199 on Prime Video. Runway 34 has been directed and produced by Ajay Devgn under the banner of Ajay Devgn FFilms. 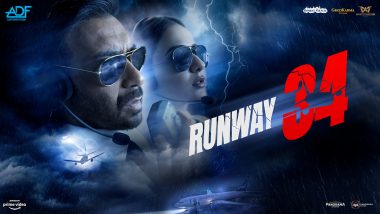 After its theatrical run, the aviation thriller film Runway 34 directed by Bollywood superstar Ajay Devgn is available for early access before digital subscription on Prime Video. Inspired by true incidents, the film follows the story of Captain Vikrant Khanna (played by Ajay Devgn), a flying prodigy, whose flight takes a mysterious course after take-off from an international destination. Cutting-edge visual treatment of the narrative, a crisp story and screenplay makes the movie an immersive watch. Runway 34 Movie Review: Ajay Devgn and Amitabh Bachchan Navigate This Aerial Drama in an Impressive Style!

The film also stars Amitabh Bachchan, Rakul Preet Singh, Boman Irani, Angira Dhar and Aakanksha Singh. Commenting on the development of early access on the OTT, Ajay Devgn said, "Runway 34 has been my dream project and I am very excited to offer viewers early access to the movie through Movie Rentals on Amazon Prime Video. The intent with every movie that I make, is to take it to the widest audience possible."

"Through the service, the film will be available to movie lovers from every corner of the country - who can enjoy streaming the movie at a time and device of their choice. For those who missed watching the movie in the theatre, you can get together with your friends and family for an at-home movie night this Friday! As a special treat for my fans, I am excited to share some previously unreleased footage from the film - I hope you enjoy it", he added. Runway 34 Movie Review: Ajay Devgn, Amitabh Bachchan, Rakul Preet Singh’s Film Receives Mixed Response From Critics.

The viewers can rent the movie in 4K quality for Rs 199 on Prime Video. Runway 34 has been directed and produced by Ajay Devgn under the banner of Ajay Devgn FFilms.

(The above story first appeared on LatestLY on May 28, 2022 02:43 PM IST. For more news and updates on politics, world, sports, entertainment and lifestyle, log on to our website latestly.com).