Actress Parineeti Chopra, who essays badminton ace Saina Nehwal in the biopic Saina, says admits being apprehensive about how people will react to her in the role. 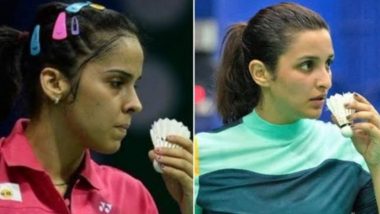 Actress Parineeti Chopra, who essays badminton ace Saina Nehwal in the biopic Saina, says admits being apprehensive about how people will react to her in the role. "It's a huge responsibility to essay someone like Saina Nehwal on screen. She is a legend and I was very scared about how people will react," she said. She is, however, happy with the response to the poster. "I'm overwhelmed with the love we are getting from all over the world. The film is a celebration of the unending spirit that lies in each woman," said the actress. Saina: Did Parineeti Chopra’s Film Change Title Logo After Twitterati Pointed Out A Hilarious Mistake in the Poster?

Director Amole Gupta can't stop praising his lead star: "Saina has inspired millions of women out there and is a true example of a strong female icon in the country today and Parineeti has put a lot of effort to represent Saina authentically." Talking about the film and Parineeti playing her, Saina said: "Everything is quite surreal. What I have achieved in life is all due to the constant support of my family. Saina New Teaser: Parineeti Chopra as Saina Nehwal Looks Determined Enough To Slam Her Opponent (Watch Video).

It has been my huge honour to play a sport I love and put my country on a pedestal while achieving my dream. Parineeti is a fabulous actor and we both connected so easily when we met. I wish the team all the best for the film and hope everyone leaves the theatre with dreams." The film is slated to hit screens on March 26.

(The above story first appeared on LatestLY on Mar 08, 2021 02:00 PM IST. For more news and updates on politics, world, sports, entertainment and lifestyle, log on to our website latestly.com).