Salman Khan Shares a Photo Twinning With His Bodyguard Shera, Fans Ask If He Is Also a Part of Antim

While we may not know about Shera's debut in films or not but he did debut into politics by joining the Shiv Sena last year in November. 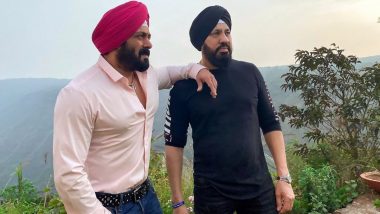 Salman Khan makes sure he remains connected to his fans and often posts videos and photos for them to enjoy on social media. The actor is currently busy with the shoot of Antim and is seen sharing updates about the film online as well. Today, the actor took to Instagram to share a dashing picture with his long-time bodyguard Shera twinning in a turban and fans cannot help but ask him if his bodyguard will also feature in his upcoming film. Avika Gor, Balika Vadhu Actress, Replaced From Salman Khan's Film Antim... The Final Truth, Mahima Makwana Roped In As Replacement.

The picture that we are talking about shows Salman Khan dressed in a salmon shirt and a pair of blue jeans. Shera is seen dressed in a black t-shirt and a pair of black jeans. The two twinned in turbans where Salman wore a pink turban while Shera's was black. Salman's hand in on Shera's shoulder as they pose for the camera. The picture garnered more than 8 million likes in just an hour of its upload.

Fans were elated to see the picture and asked him if Shera was going to be a part of Antim. A user wrote, "It's his Antim look, is Shera also in the film," while many dropped fire emojis on the photo. While we may not know about Shera's debut in films or not but he did debut into politics by joining the Shiv Sena last year in November. Earlier, Salman had posted a picture posing with Shera and expressed his gratitude towards his 25 years old friendship with the bodyguard. He wrote, "25 years and still 'Being strong'...Shera." Salman Khan Celebrates 25 Years of Bond with Bodyguard Shera, Shares a Special Instagram Post.

Talking about Antim, produced by Salman Khan Films, Antim is said to hit the silver screens in 2021. The film also stars Mahima Makwana, after replacing Avika Gor, opposite Aayush Sharma in a key role. The film is the official remake of the Marathi film Mulshi Pattern and is being directed by Mahesh Manjrekar.

(The above story first appeared on LatestLY on Jan 20, 2021 06:56 PM IST. For more news and updates on politics, world, sports, entertainment and lifestyle, log on to our website latestly.com).