Shah Rukh Khan Greets His Fans Outside Mannat Impromptu, Fans Go Crazy as He Climbs on His Car! (Watch Videos)

Yet again, just a day after Eid, King Khan's car was mobbed by a sea of fans and he showed them the cutest gesture! He stood on the car! 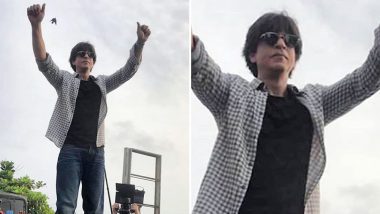 That's Shah Rukh Khan for you! The dimpled superstar has been winning hearts for generations now. His residence in Bandra which he lovingly named as Mannat is almost a tourist spot for those who visit Mumbai and those who love SRK. During special occasions like Eid and Birthday, he always waves at his fans from his terrace and that's enough for them to cherish for years. Yet again, just a day after Eid, King Khan's car was mobbed by a sea of fans and he showed them the cutest gesture! He stood on the car! Shah Rukh Khan Follows The Custom, Waves To His Fans Outside Mannat on The Occasion of Eid - View Pics.

The fan following of this talented being has been constant or increasing, if we may say so! His humble gestures and charming personality work like magnet every damn time and that is more than just loving his films! And guess what? The handsome star definitely knows the value of it. It is a known fact that he never disappoints his fans when it comes to such gestures. In this video too, we can see him climbing atop the car amid the screaming crowd. Check out the videos here.

Actor @iamsrk has to get upon his Car to wave Hello to his fans Gathered at his Residence #mannat in #Bandra . #shahrukhkhan #fandom #fans #love #care #bollywoodstars #actors #paparazzi #yogenshah @yogenshah_s

@iamsrk Clicked at his Residence today . Fans mobbed his Car to have Glimpse of him as he was leaving from #mannat . #shahrukhkhan #fans #love #magic #bollywoodstars #actors #paparazzi #yogenshah @yogenshah_s

The video seems straight out of his film- Fan, doesn't it? Although, his characters from the film were not related to him, the fan frenzy shown surely was. Such a large chunk of fans assembled just for one glimpse and that unanimous scream is the ultimate proof of their love for him!

(The above story first appeared on LatestLY on Jun 06, 2019 11:59 PM IST. For more news and updates on politics, world, sports, entertainment and lifestyle, log on to our website latestly.com).