Silence – Can You Hear It Movie Review: Manoj Bajpayee Takes the Charge in This Engaging if Predictable Murder Mystery (LatestLY Exclusive)

Silence... Can You Hear It? is a Zee5 murder mystery film, written and directed by Aban Bharucha Deohans. The movie stars Manoj Bajpayee, Prachi Desai, Sahil Vaid and Arjun Mathur in important roles. 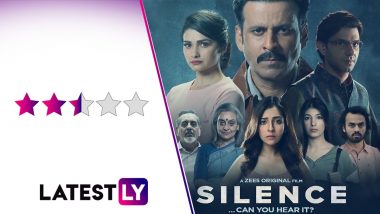 Silence – Can You Hear It Movie Review (Photo Credit: Zee5)

Silence - Can You Hear It Movie Review: Who doesn't love a good murder-mystery? The fun of guessing the right culprit who committed the crime does pump up your blood, especially when you are left guessing till the end. Manoj Bajpayee's new film, Silence... Can You Hear It?, written and directed by Aban Bharucha Deohans, promises a compelling whodunit that comes without frills and needless distractions. It keeps you on the edge with regards to the identity of the killer, but whether you love the reveal or not - that is a different question altogether. OTT Releases of the Week: Radhika Apte’s OK Computer on Disney+ Hotstar, Sanya Malhotra’s Pagglait on Netflix, Manoj Bajpayee’s Silence – Can You Hear It on ZEE5 and More.

So what's the crime committed here? A group of hitchhiking friends discover the decaying corpse of a girl hidden in the shrubs on top of a hill. The corpse belongs to Pooja (Barkha Singh), the daughter of an influential man. The case is assigned to ACP Avinash Varma (Manoj Bajpayee), who also gets a separate team (Prachi Desai, Sahil Vaid, Vaquar) to help him with the investigation.

As they try to figure out the motive and the killer, the needle of suspicion often falls on Ravi Khanna (Arjun Mathur), an upcoming politician, at whose house was Pooja last seen, and whose wife - also Pooja's bestie - fell into coma the very same day after an accident.

While I do not want to reveal anything much about the film to avoid spoiling the mystery here, Silence... Can You Hear It? works best if you are completely invested in the proceedings and allow Varma to reveal the killer for you. The investigation process shown is engaging, with Manoj Bajpayee's acting prowess coming in play to guide you through even some patchy areas. It isn't a very difficult role for the actor, but it is a pleasure for the viewer to see him own the show completely and get on with it. Another actor that stands out is Arjun Mathur, especially effective in a crucial flashback scene in the third act. Silence Can You Hear It: Prachi Desai All Set To Make Her OTT Debut With a Murder Mystery Film.

The suspense in itself may not be as difficult to guess, considering we have very few red herrings and by the time the needle of suspicion is away from the main herring, it is easy to fit in rest of the puzzle. That predictability is a sore point for sure.

Even the treatment is just about okay, with the film giving a feel of gloss but not of polish. At times, Silence... Can You Hear It? gives an impression of a two hour long episode of CID that's just more well-lit - Varma's team even has a Daya-like character. It also doesn't avoid the cliches, be it in how the lead character is written - a loner cop who isn't stickler to the rules (even if it hardly matters much) with a troubled family life - or in dealing with the suspense. Even though Silence... Can You Hear It? doesn't have any needless distracting subplots, at two hours 16  minutes, the film could still have been shorter.

PS: - I never really got the significance of the title much when it comes to the plot, apart from sounding fanciful.

- The Investigation Process Keeps You Invested

- The Reveal May Not Be Its Strength

While the suspense may not itself be the film's biggest forte, the lack of frills and Manoj Bajpayee's sharp performance could keep you invested in Silence... Can You Hear It?. The film is streaming on Zee5.

(The above story first appeared on LatestLY on Mar 26, 2021 12:02 PM IST. For more news and updates on politics, world, sports, entertainment and lifestyle, log on to our website latestly.com).