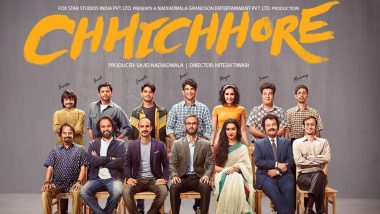 Mumbai, Sep 6: The Sushant Singh Rajput superhit Chhichhore was released a year ago on this day and, marking the occasion, his co-stars in the film, Shraddha Kapoor and Varun Sharma, have paid tribute to the late actor.

Varun took to Instagram and posted a picture with "Kammo" written against a black backdrop, with a heart sign and some star signs. In the film, Varun's character used to call Sushant as "Kammo".

Shraddha, who played Sushant's girlfriend (and eventually, on-screen wife) in the dramedy, posted a special video comprising pictures and clips of Sushant from the sets of the film.

Directed by Nitesh Tiwari, "Chhichhore" revolves around Sushant and his group of friends at engineering college.

Sharing the same video on Instagram Story, Tiwari wrote: "You will be in our hearts forever."

Sushant was found dead on June 14. Currently, the CBI is probing the cause of his death along with Enforcement Directorate (ED) and Narcotics Control Bureau (NCB).

(The above story first appeared on LatestLY on Sep 06, 2020 01:52 PM IST. For more news and updates on politics, world, sports, entertainment and lifestyle, log on to our website latestly.com).