The Zoya Factor: All You Need to Know About Zoya Solanki, the Character That Sonam Kapoor Is Playing in the Film 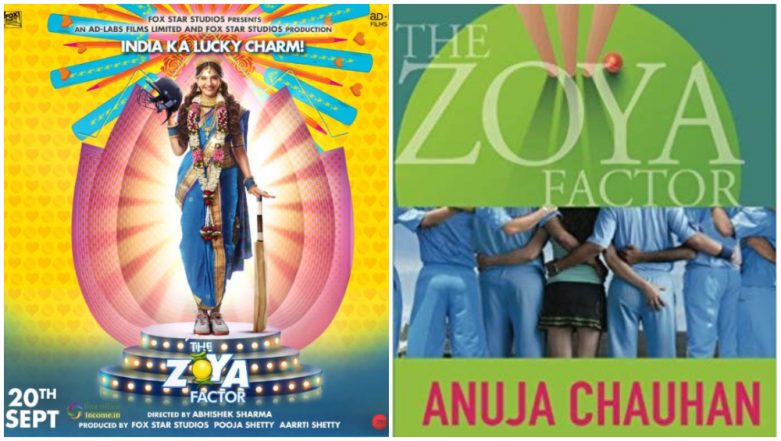 The Zoya Factor poster and the book (Photo Credits: Twitter)

After playing an unconventional role in Ek Ladki Ko Dekha Toh Aisa Laga, released earlier this year, Sonam is back to being on the chirpy mode with The Zoya Factor. The movie marks Malayalam star Dulquer Salmaan's second film in Bollywood, after Karwaan that came out in 2018. The Zoya Factor is directed by Abhishek Sharma of Tere Bin Laden and Parmanu fame. This would be the first romcom for the film-maker, and an unusual one at that. The Zoya Factor: Sonam Kapoor as the Modern Day Goddess is Here to be Your Lucky Charm (Watch Video).

For the uninitiated, The Zoya Factor is based on a novel by Anuja Chauhan that goes by the same name. Published in 2008, the novel was one of the year's best-selling works in Indian fiction. Sonam Kapoor is playing the titular character of Zoya. So what does she do in the film? Based on what we have read from the novel, she is that lucky charm for a beleaguered Indian Cricket Team and helps them get back to winning ways. Or that's what the rest of the country thinks!

Watch the Motion Poster of The Zoya Factor:

Before we get ahead, let us warn you that the post below has some spoilers about the movie, if you haven't read the book. The Zoya Factor: Sonam Kapoor Wishes Dulquer Salmaan with This New Still and We’re All Hearts Seeing Their Chemistry!

So who is Zoya Solanki? She works as a client servicing rep for an advertising agency, and is a huge Shah Rukh Khan fan. So while she was excited to be assigned for an ad shoot for the Bollywood superstar, her agency makes her leave the shoot for a new assignment, much to Zoya's heartbreak. The Zoya Factor: Did You Know Shah Rukh Khan Was Supposed to Make This Movie Before Sonam Kapoor-Dulquer Salmaan Stepped In?

That new assignment involves shooting an ad for the Indian Cricket team who was on a losing streak then and had got a new captain in the form of a committed Nikhil Khoda. This phase of the Indian cricket team was inspired by the events post the 2007 World Cup fiasco when a young Mahendra Singh Dhoni was made the captain. Just to clear your doubts, Khoda is less of Virat Kohli and more of a Dhoni.

Anyway, when she meets the cricket team on the morning of their first match in Dhaka, the players learn an interesting tidbit about Zoya. She was born at the same moment when India lifted the 1983 Cricket World Cup under the leadership of Kapil Dev.

The team players maker her sit with them for breakfast just for fun sake. And voila! They win the match on that day. The superstitious players begin to start believing that Zoya is actually a lucky charm for them and they persuade her agency to let her accompany them during matches, much to her annoyance. The team begins to win more matches and soon news begins to spread out that the Indian Team has found a lucky charm in a young girl.

As Zoya adjusts herself to the new fame that she never asked, there is no one more annoyed that Khoda. He feels that she is taking away the credit of their hard-earned wins, and more than often, very rude to her. Things get even more complicated, when the duo realise they just cannot ignore the electrifying sexual chemistry between them.

With the World Cup looming around and Zoya getting into murky controversies, misunderstandings creep between her and Nikhil, who were on the verge of being on a relationship. Defying the expectations of the fans and the players, Zoya decides to stay away from the World Cup Final, letting Khoda and his team have the chance to win on their merits. Whether they do it or not, and whether Zoya and Nikhil become an item...well, you can read the book, or watch The Zoya Factor on September 20 to know that!