'Love is Love', his popular outing, is not just a single for the man, It’s symbolic of a glimmer of hope for the LGBTQ community! 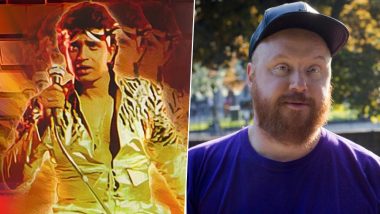 For those who found his single 'Legendary' featuring Leila K quite Interesting, Petter Wallenberg needs no introduction. The Swedish music sensation, song writer, producer, author and activist Petter Wallenberg was in the city of Mumbai recently.  'Love is Love', his recent outing, is not just a single for the man. It’s symbolic of a glimmer of hope for the LGBTQ community in India.

In his exclusive chat with LatestLY Petter talked about Bollywood music, his favourite Mithu Da numbers (Yes, he is pretty old school even in terms of getting his beats right) and is fond of Indian cuisine. He even crooned his favourite Bollywood track in this video and explained why he loves Mumbai, the city that he now knows like his own backyard!

Petter collaborated with Sushant Divgikar, who is the country’s first gay celebrity drag queen, a star of night clubs and TV shows. This video features Dancing Queens, India’s first transgender dance group, who are part of the hijra community. “

"So, in one single music video, both extremes of Indian society are showcased. I loved getting access to worlds most people will never get into. What makes me the happiest is all the response from regular people, how much joy it brings," maintains Petter.  He is excited about the release of his album Rainbow Riots India.

(The above story first appeared on LatestLY on Jul 02, 2019 05:52 PM IST. For more news and updates on politics, world, sports, entertainment and lifestyle, log on to our website latestly.com).